Vommili, India -- A treasure trove of historical evidence of immense heritage value has been by found by archaeologists at the Vommili village of V. Madugula mandal in the district recently. 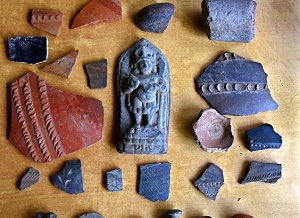 << The historical evidence found in the trial excavations in Visakhapatnam district on Saturday.— Photo: K.R. Deepak

The objects retrieved from a trial excavation on the surface include a standing image of the Vajrayana deity ‘Heruka’, a terracotta elephant head, conical mud bowls, thumb and finger print designs on pots, polished black ware, dull chocolate-coloured slipware and herringbone patterns.

The site, located close to the hills at Vommili, was used for cultivation for a long time, causing damage to some of the historical evidence.

The idol of ‘Heruka’ was found by the villagers and placed under a tree and was being worshipped.

The discovery of some more earthen materials like potsherds and decoration pottery may have given rise to the suspicion that a treasure trove was lying buried under the ground.

The land had changed hands and the latest owner applied to the District Collector seeking permission for digging and construction.

The Collector then appointed the Special Deputy Collector (R & R), APIIC, Atchutapuram, RDO (Anakapalle), the Tahsildar and the Sub Treasury Officer (both V. Madugula) and Station House Officer of V. Madugula besides the Assistant Director (Archaeology and Museums) to look into the matter .

“We inspected the site on December 10. Trial excavations revealed rich historical materials. The retrieved objects indicate that the Buddhist site flourished between 3 century BC and 8 century AD. This is the first time that evidence of a Buddhist monastery of such an era has been discovered in Visakhapatnam district,” Assistant Director (Archaeology and Museums) K. Chitti Babu told The Hindu on Saturday.

“Most of the Buddhist heritage sites found in the city and in Srikakulam, Vizianagaram and Visakhapatnam districts are located along the coast and had flourished between 3 century BC and 3 century AD. But this site is located in the hinterland, far from the coast, and it flourished for about a thousand years,” he said.

A unique feature of the Buddhist heritage sites in north coastal Andhra Pradesh is that the objects found at the site indicate the presence of various architectural styles (south and north Indian styles as also styles from overseas) unlike in Amaravathi and other places, were only Andhra style architecture is found.