40 Buddhist relics unearthed at Moghalmari in a single day

KOLKATA/MIDNAPUR, India -- The ancient site at Moghalmari witnessed much excitement on Sunday morning when around 40 bronze artifacts, dating back to fifth and sixth centuries, tumbled out of the earth, as the state archaeology department re-launched excavation of the Buddhist vihara after a gap of two years. The digging work coincided with a two-day Moghalmari Festival inaugurated on Sunday. 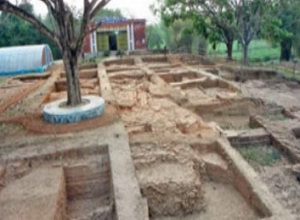 About two kilometres away from Dantan in West Midnapur as bronze artefacts dating back to fifth and sixth centuries started tumbling out of the ground, one after the other. The state archaeology department has re-started the excavations at the site after a gap of two years.

Around 11am, a bronze Buddha statuette, measuring 7cmX6cm, first surfaced in the middle trench of the site, which is about 2km from Dantan in West Midnapur. After this, several more statues of varying sizes started showing up to loud cheers from archaeologists as well as residents of the area. Monks from across the country, who have converged on Moghalmari for special prayers and seminars at the festival being organized by Kolkata-based Bauddha Dharmankur Sabha, were equally enthralled by the discoveries at the vihara, believed to be one of the oldest Buddhist sites in the country.

A two-day Moghalmari Festival also started there on Sunday organised by the city based Bauddha Dharmankur Sabha. Invited by the Sabha, monks from across the country are camping at the site for special prayers and seminars. Naturally, the discovery of the bronze statuettes generated all around veneration for the site has already been established as one of the oldest Buddhist viharas of the country and definitely of Bengal.

While the smallest statuettes were around 7cm high, the biggest ones stood tall at 20-25cm, with widths varying from six to 12cm. While most were bronze Buddhas, statuettes of Saraswati and Avalokiteshwaras were also found. "We are going very slow with the digging work as relics are strwen across the entire zone. Finding over 40 antique figurines in a single day is definitely rare and prized. We are thrilled beyond explanation," said Prakash Maity, who is in charge of the Moghalmari excavation. "Earlier, we found stucco figurines, gold, silver and mixed metal coins, pendants, votifs and seals." The site dates back to the post-Gupta period when the dynasty's influence waned and local satraps-here, Raja Samachar Dev, gained control. The pre-Pala phase of Bengal history was shrouded in mystery, experts said.

In fact, the state archaeology directorate halted the digging work as experts needed to analyse the coins and seals to verify the site's dates. After research, historians were confirmed that they had found the key seal that revealed the vihara's name as 'Sribandaka Vihara Aryabhikkhu Sangha' and the inscriptions on it established that the institute was founded and functioned in the 5th-6th centuries, if not earlier. The state government has decided to release funds for the new phase of excavation. Already, more than Rs 3 crore has been spent.

Atanu Pradhan, a local enthusiast and secretary of Tarun Seva Sangha, who was instrumental in drawing the Calcutta University's attention to the mound under which the vihara lay buried for centuries is elated. "I am sure that with time, archaeologists will stumble upon artifacts of greater value and the site will be officially announced a fifth-century vihara," Pradhan said.