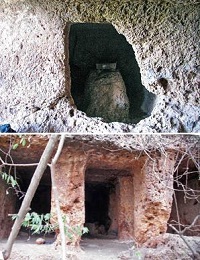 << The stupa at Belanki that led to the belief that the caves are Buddhist; (below) a cave on Kukatoli village side.

While Maharashtra is known to be home to several ancient Buddhist caves that are wildly popular with tourists, including the world famous Ajanta and Ellora Caves, several other, smaller caves spread out across the state's terrain — which are equally significant in heritage value — are lesser known. And, it appears that there is no end to such archaeological treasures, with the discovery of new centuries-old man-made caves at Sangli district, in the Giriling Hills of southern Maharashtra.

Researchers believe this new site also comprises Buddhist caves, which typically consist of stupas, chaityagrahas and viharas. The remains of a large Buddhist stupa was found at the new location, with water tanks excavated nearby. While there are not too many wall carvings, sculptures or artefacts around, based on the remains of the stupa and general architecture, researchers believe these caves are Buddhist in origin.

Mansing Kumthekar, founder president of the Miraj Itihas Sanshodhak Mandal, who discovered these caves along with Gautam Katkar, a professor at the Arts and Commerce College in Satara, shared, "The caves were made in the Himayana period, in approximately first century AD. We were exploring this area since last year, when we finally found these caves. After spending some time on researching them, we have come to the conclusion that their origin is Buddhist."

Interestingly, the existence of such caves is known and documented in the Satara and Kolhapur districts of southern Maharashtra, but it is the first time that these structures have been discovered in Sangli. The Giriling Hills are located on the border of Miraj and Kavathe- Mahankal talukas of Sangli, stretching from east to west and commonly known as 'Old Panhala'. The hill has a huge plateau, including 400 acres of cultivated land. Ancient inscriptions mention it as 'Vundragiri'; local villagers call it 'Undroba'. The western and eastern sections of the hill are called the 'Girilinga' and 'Gausiddha' hills. A fortified wall-like structure was constructed at the border of both sections. Local residents call this the 'Moat of Old Panhala'. Due to these fortified wall and moat structures, it was believed that this hill is an old fort.

Muphid Mujawar, a history scholar from the area now based in Delhi, shared, "There were no caves known previously in this region. The new find signifies two things — firstly that this area was on an important trade route, since such caves are made mostly on trade routes, and secondly, that there was Buddhism prevalent in the area. Previously, no one had explored the area with focus on such caves."

Till date, fort-lovers and trekkers had extensively discussed the historical value of the fortifications on these hills — the caves, however, were neglected until this discovery.

Groups of caves have been discovered in separate sections of the hill — four caves face northwards, towards Kukatoli village (Kavathe- Mahankal taluka) and two others face southwards, towards Belanki and Kadamwadi villages (Miraj taluka). Locals already knew about two existing 'Girilinga' and 'Gausidddha' caves, but nobody was aware of the others.

Kumthekar added, "The Buddhist caves at Satara and Kolhapur were the only known ones of their kind in southern Maharashtra. But, the new discovery of six caves in Sangli throws new light on Buddhist tradition and the ancient history of the region."

Saili Palande Datar, a city-based indologist, said, "Some sculptures would have helped to study the affiliation of these caves. Their plans and geographical context needs to be further assessed to determine their nature and use. It is an interesting find, considering that these areas were thought to not house any other caves. There is now a need for some further rigorous exploration, considering the strategic location of Sangli on the border of Maharashtra, Karnataka and Andhra Pradesh."