GHANTASALA, India -- A group of amateur historians on Monday handed over a Buddhist Chaitya Chaitram (Umbrella) dated back to the 2nd Century A.D to the Archaeological Survey of India’s Buddhist museum at Ghantasala village in Krishna district. 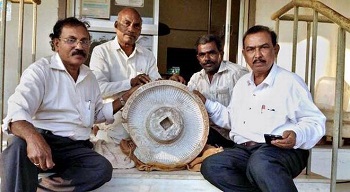 Repalle-based epigraphist B. Ramesh Chandra and Silar Mohammed on Monday visited Siddhantam village in Gudivada mandal, where a family had expressed its willingness to return the Buddhist artefact to the ASI.

The family of Ch. Rama Deekshitulu of Siddhantam village possessed the umbrella since six decades, and had recently decided to hand it over to the government for conservation.

The umbrella made of Datchepalli stone bears an inscription which was deciphered by Mr. Ramesh Chandra. The inscription is in Pali language and style of the script has been identified as ‘Brahmi’.

“The inscription talks about donation of the umbrella by Mr. Deekshitulu family to the Buddhists,” Mr. Ramesh Chandra told The Hindu. The ASI authorities at the museum here on Monday placed the umbrella in the museum and kept it on display for visitors. It was learnt that Mr. Deekshitu’s son Mr. Murali Krishna Sastry’s wanted to keep it on display at Ghantasala, a Buddhist site.
TOP