Kabul, Afghanistan -- Afghan officials say they are trying to reclaim up to four tons of looted artifacts recently recovered in Great Britain. Authorities warn Afghanistan's rich archeological sites are being over run by looters, and the country is losing important parts of its heritage. 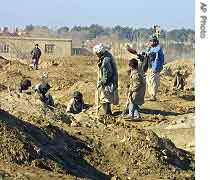 << Diggers look for artifacts outside the town of Balkh, Afghanistan (2002 photo)

Officials say the British haul includes an enormous collection of ancient artifacts, everything from Buddhist statues to Bronze Age weapons.

Afghanistan's director of museums, Oamara Masoudi says efforts are under way to reclaim the looted items, which were collected during various police and customs operations in the past two years.

"We have contact with our embassy in London, we request, we want to return back these pieces as soon as possible," said Oamara Masoudi.

The British Museum in London is storing most of the items as negotiations continue over their eventual return to Afghanistan.

When exactly that will be remains an open question.

Officials on both sides have voiced concerns over Afghanistan's capacity to protect and care for the collection.

But for Mr. Masoudi, seated inside a largely empty museum, the delay is almost unbearable.

The artifacts are part of Afghanistan's cultural legacy and he says the museum is ready to share them with the Afghan public.

"It should be for all Afghans. We will lose a lot, we will lose our history," he added.

No matter when the artifacts are returned from Britain, he says this is just one part of a much larger struggle.

Every year, almost literally stone by stone, vast portions of Afghanistan's heritage are being smuggled out of the country.

Mr. Masoudi says that in the early 1990s the museum controlled more than 100,000 items. But after nearly 15 years of war and insurgency, it now has fewer than 30,000, the rest plundered by corrupt officials and thieves.

But, he says, the looting elsewhere in the country has gotten even worse in the past few years.

Thieves are taken advantage of the ongoing insurgency to pillage unprotected archeological sites, many of which date back more than 3,000 years.

Government officials say they are relatively powerless to stop the rise in looting.

As one official says, before Afghanistan can really focus its past, it has to secure its future, and of course by that time, it may be too late.