LHASA, Tibet -- Southwest China's Tibet Autonomous Region has launched a two-year project to study and preserve a bundle of Buddhist scriptures that were written on leaves more than 1,000 years ago and brought to the region from India. 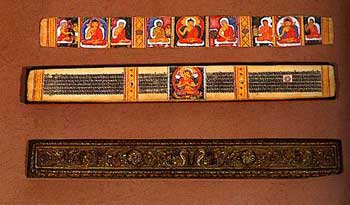 << Southwest China's Tibet Autonomous Region has launched a two-year project to study and preserve a bundle of Buddhist scriptures that were written on leaves more than 1,000 years ago. (File Photo)

There are some 4,300 'pages' of the rare tree-leaf Buddhist Sanskrit scripture in 426 volumes, said Hu Chunhua, a top official of the autonomous Region, quoting figures provided by the local cultural heritage administration.

The documents were brought to Tibet from India between the 7th and 13th centuries and have remained quite well preserved, said Cewang Jinme, president of the Tibet Academy of Social Sciences.

The scriptures are inscribed on stripes of leaves of the pattra tree which is native to tropical climates and similar to a palm tree. The tree's leaves, which are easily transportable and durable, were used before there was wide access to paper. A steel pen was used to etch the Sanskrit directly on to the leaves, which themselves became a Buddhist symbol of brightness as the scriptures brought enlightenment.

Most of the leaf-inscribed scriptures are stored in major monasteries, museums and research institutes in Lhasa, Xigaze and Shannan, said Hu, adding that they are better preserved than others that remained in India where many decayed in the hot, humid climate or were lost in wars.

Hu said Tibetan researchers will carry out a thorough survey of all the scriptures written on pattra tree leaves.

"Some of the pieces are in the hands of private collectors and smaller monasteries and remain undocumented," said Hu.

They will also make photocopies of all the documents to facilitate their study by Sanskrit specialists, he said.

He said only 10 people in Tibet can read the language. Four Tibetan specialists have enrolled in Beijing University to study Sanskrit and they are expected to later train more language professionals.

The preservation project is jointly sponsored by the Chinese Academy of Social Sciences and the China Tibetology Research Center.