SEOUL, South Korea -- A bronze urn, believed to contain the remains of a prominent Buddhist, was discovered at the site of Wangheung Temple in the ancient city of Buyeo, a capital of Korea's Baekje Kingdom (18 B.C.-660 A.D.). 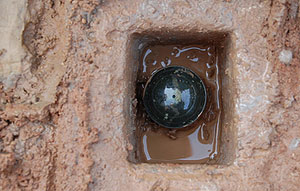 << The urn unveiled by the Cultural Heritage Administration (CHA): Photo courtesy by CHA

Earlier on Oct 24, the CHA discovered a set of gold, silver and bronze urns holding sari, or the remains of a great monk after cremation, from the Baekje Kingdom (18 -660 A.D.) 1,430 years after it was buried.

It is considered to be the biggest discovery from a Baekje excavation since the digging up of a gilt-bronze incense burner in 1993, according to the Buyeo National Research Institute of Cultural Heritage Wednesday.

The urns and other sacrificial items were discovered in a Moktap, or wooden Pagoda. It was found in the Wangheungsa Temple grounds established by Baekje King Wideok to honor the death of his son in 577.

The set is composed of a bronze cylinder urn_10.3cm in height_holding a silver bottle-shaped urn, which contains a small gold urn inside it. 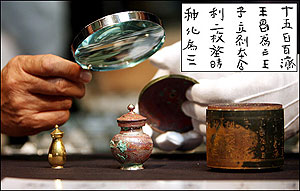 From left, a set of gold, silver and bronze urns from the Baekje Kingdom (18 -660 A.D.), which was discovered earlier this month, the Buyeo National Research Institute of Cultural Heritage announced Wednesday. Inset, an inscription on the bronze urn which provided crucial information on determining the age of the artifacts. / Korea Times  >>

The bronze cylinder urn carries an inscription consisting of 29 letters, with six rows made. It was translated to read ``Jeongyu Feb.15 (577), Baekje King Chang (King Wideok) builds this temple for the late prince and when two saris were buried, they became three in accord with the gods.''

The discovery sets the construction date of the Wangheungsa Temple at 577. Until now, based on the records of Samguksagi, or the History of the Three Kingdoms, the temple was thought to have been built in 600.

``This provides an important base for chronological recordings of Baekje history and other archaeological research materials from the same period,'' the research institute said.