The sound of artifacts disappearing

How much more of the world's treasures do museums need?

Los Angeles, USA -- In old lhasa, holy city of Tibet, stands the sacred Jokhang Temple. Inside Jokhang is a golden statue of Buddha, the most revered statue in Tibet. 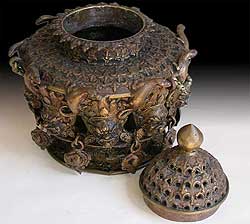 It was brought as a dowry from China in the 7th century, when a Chinese princess married a Tibetan king. The statue marks not only the wide-scale introduction of Buddhism to Tibet but a crucial union in a long history of alliances and wars between two nations.

Pilgrims by the thousands arrive daily in Lhasa, masses of them walking in the same sacred direction around Jokhang. The fact that the statue is still there to worship is a surprise. Tibet, like so many places, has been scraped out like a gourd, its antiquities smuggled away.

There are plenty of buyers, and most of them are not in Lhasa. The biggest sellers of Asian artwork in Japan, Europe and the U.S. have dealers handle all the logistics, ushering artifacts through customs so collectors don't have to.

Last week, federal agents raided four Southern California museums, seeking artifacts and records linked to the owner of the Silk Roads Gallery in Los Angeles and to an alleged art smuggler. The gallery has been a favorite of celebrities and discerning nabobs, offering a large selection of Ming and Qing dynasty Buddhist statuary as well as pieces from across East Asia, including Tibet.

How much more of the world's artifacts do we need?

In museum collections across the country, ancient bowls are stacked because there is no more room. I have walked the astonishing corridors locked within the American Museum of Natural History in New York and the overstocked storage space of the Peabody at Harvard University -- four stories of towering pre-Columbian ceramics. I say enough is enough.

A recent study of collections held in public trust in the United States found that 40% of all stockpiled artifacts are in unknown condition. Curators who actually work with their collections -- rather than in well-paid office positions -- complain of bags splitting open and boxes decaying. Some artifacts are being "de-accessioned" -- sold to collectors -- or in some cases, as with samples and specimens, tossed in the trash.

Shift your focus off the raids in Los Angeles for a moment. Look back to Tibet, where, for every artifact on display or in storage somewhere else in the world, there is a hole. A hole in a shrine, a hole in a tomb, a hole in a people's history. The statue at Jokhang is one of the fortunate few that remain. Nearly all the rest are replicas.

If a missing artifact has not been smuggled out, it has probably been destroyed. When the Chinese overthrew Tibet in 1960, tanks leveled the monasteries.

Looking for tangible remains of Tibetan history, I traveled to a remote monastery northeast of Lhasa, once one of the oldest in Tibet. In its day, it was a fortress of golden spires pointing at the sky. Now, you can buy pieces of it and scavenged statues from shady characters.

What is here now is but a meager reconstruction. I met a young monk who explained that when Chinese soldiers came in 1960, they killed or imprisoned the monks living here. But one monk escaped. He fled into the mountains with a set of 1,000-year-old texts. These were the holiest of writings in this part of Tibet, the founding prayers from the earliest days of Tibetan Buddhism. They belonged to this monastery alone.

For decades, the monk kept these texts hidden. In the early 1980s, the political climate began changing, and the monk reemerged with them. With the prayers returned, the monastery could be rebuilt.

Now pilgrims have begun to come back, leaving offerings of money and carved stones. After spending five days in the monastery, I finally asked to see the ancient texts. The young monk took me into a room filled with sculptures of gods and kings, all recent purchases from Nepal and India. He unlocked a small wooden door and pulled out a block of parchment wrapped in tanned leather. The sheave of long, narrow parchments were covered front and back with intricate calligraphy, an ancient script that few but lamas can read.

Something like this would perhaps be auctioned at Sotheby's for several thousand dollars. The actual price is the history of a monastery and the lives of monks.

Every artifact that passes through our borders comes with a silent story such as this. Knowing that we have emptied much of the world of these precious secrets, this would be a good time to stop and breathe, and to let go our grip.

When the monk finished showing me the texts, he wrapped them and returned them to their safe place. There they will remain for as long as the monks can hold on to them.