Bangkok, Thailand -- Cambodia and Thailand were in total agreement about a famous border temple on Monday: Both claimed they were puzzled why Unesco called off a meeting with their foreign ministers over Wat Preah Vihear. 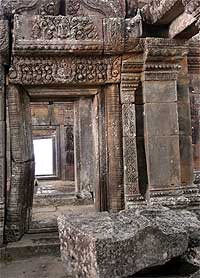 The United Nations Educational Scientific and Cultural Organisation late on Sunday cancelled a meeting with Thailand and Cambodia over efforts to put the Preah Vihear temple on the Unesco World Heritage list.

In Bangkok, officials said they had no idea why Unesco called off the meeting, which was to have taken place on Friday and Saturday in Paris. Foreign Minister Noppadon Pattama was prepared for the trip, when Unesco notified the ministry of the cancellation.

But in Phnom Penh, there was even more confusion.

"We received no invitation from the Unesco about talks, so we do not understand why they said talks are cancelled," said Phay Siphan, spokesman for the Cambodian cabinet, or Council of Ministers.

The Cambodians said there was no question about jurisdiction over the temple, and the only topic up for discussion is border jurisdiction.

The campaign to make Preah Vihear a Unesco site has turned into something of a nightmare. Cambodia and Thailand must come to some agreement over putting the temple, known as Khao Phra Viharn in Thailand, on the world heritage list.

The temple is at the top of a sheer cliff which the World Court ruled in 1962 is in Cambodia. However, the only easy access to the temple is through Thailand. If that weren't enough, the border in the region, except for the actual temple grounds, is unclear because of border disputes.

Cambodia said on Monday that no discussions mediated by the UN body had been mooted in past months and the issue was under control without the need of intervention by a third party.

But Thai officials said they had been informed that Unesco will now send its representative, Francesco Caruso, for separate talks with the Thai and Cambodian governments.

Mr Caruso has been appointed by Unesco as a special coordinator between Thailand and Cambodia on the issue and is due in Bangkok next month.