Voices from the cave

Dunhuang, China -- A traveler falls into a river and calls for help. A huge stag with a fur of nine colors saves the drowning man. The queen of a nearby kingdom dreams about the stag and longs for its fur. 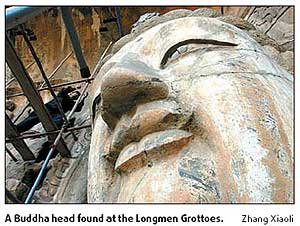 She prompts the king to post a reward for anyone who can locate the deer. The traveler had promised the stag not to tell anyone about it, but on hearing about the reward, he goes to the palace and breaks his promise.

When the king attempts to shoot the stag, the deer's body emits a dazzling light that shields it from the arrows. The stag tells the king how it saved the traveler. The king is moved and sets it free. Due to their greed, the traveler and the queen both die.

Buddhism spread east to China 2,000 years ago, bringing philosophy, literature, music, dance, sculpture, painting, architecture and other art from ancient India. It met strong resistance and many rulers tried to drive it out by killing monks, burning temples and scriptures but it managed to survive.

In 64AD, the Buddhist masters Kasyapa-matanga and Gobharana from the western regions - today's northwest China and Central Asia - were pioneers in introducing Buddhism to Central China. Emperor Mingdi (reigned 28-75AD) of the Eastern Han Dynasty (25-220AD) invited the two masters to translate the Buddhist scriptures at Baima (White Horse) Temple in the capital city of Luoyang, in Henan province.

Master Fa Xian of the Eastern Jin Dynasty (317-420AD) was the first Chinese who reached Lumbini in today's Nepal, the place where Sakyamuni, the founder of Buddhism was born in 624BC. He brought back a large number of scriptures and his travelogue A Record of the Buddhist Kingdoms provided precious information about Buddhism and the history of the area he visited.

Xuan Zang of the Tang Dynasty (618-907AD) was the most important figure to seek Buddhist teachings in ancient India. From 629-645AD, he covered 50,000 km and brought back 657 Buddhist scriptures. It is his story that inspired the classic novel Journey to the West.

In Han Buddhism, monks and nuns must keep celibate, wear robes, shave their heads and abstain from meat.

Buddhism entered Tibet from India in the 7th century and spread among the minority and ethnic groups in Tibet and Inner Mongolia, Sichuan and Yunnan provinces.

Pali Buddhism is popular among the Dai, Blang, Achang, De'ang and Va minority ethnic groups who live in southern and southwestern Yunnan province.

As Buddhism spread into China, pious believers dug grottoes out of mountains and filled them with huge statues, niches and murals. The following are five most prominent grottoes in China.