Jogjakarta, Indonesia -- Making lists of the world's most impressive monuments is an irrational and ultimately pointless enterprise: Who has seen all the wonders of the world? And what would the criteria be? 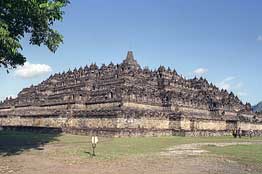 Yet scribblers have been at it since the second century B.C., when a Greek poet named Antipater of Sidon came up with his canonical seven, now all gone or reduced to rubble except the pyramids of Giza.

If Antipater had lived a millennium later, he would surely have put Borobudur, the astonishing stone mountain of exquisitely wrought sculpture in Central Java, on his list. No construction of the preindustrial era makes a more wondrous impression. Alfred Russel Wallace, one of the most well-traveled men of his day, wrote of Borobudur in 1869, in "The Malay Archipelago" (a book usually cited minus its melodious subtitle, "The Land of the Orang-Utan and the Bird of Paradise"): "The amount of human labor and skill expended on the Great Pyramids of Egypt sinks into insignificance compared with that required to complete this sculptured hill-temple in the interior of Java."

The walls of Borobudur, built in the eighth century under the supervision of Gunadharma, are lined with bas-reliefs illustrating Buddha's life and teachings.

Aerial photographs of Borobudur convey its stupendous mass -- nearly two million cubic feet of fine-grained, mellow gray stone quarried from local riverbeds -- but fail to give a sense of the monument's transcendent beauty. Often described as the largest Buddhist monument in the world, Borobudur rises to a height of 400 feet, nearly as tall as Cheops' pyramid, in a series of concentric terraces. Its walls are lined with exquisitely carved bas-reliefs illustrating episodes from the life of the Buddha and his teachings, amounting to more than a mile of continuous sculpture -- and that doesn't include 504 life-size statues of the Buddha.

Borobudur was built at the end of the eighth century under the supervision of an architect named Gunadharma, whose name survives in the same legendary realm as that of Imhotep, Egypt's first pyramid-builder. Gunadharma erected his masterpiece around an existing hill; then the reliefs were carved in situ. The pilgrim was meant to proceed along the symmetrically arranged galleries on a symbolic spiritual journey, moving upward from terrace to terrace, each level representing a higher plane of consciousness, until he finally reaches enlightenment at the summit, which is capped by a large stupa, or dome.

One of the most intriguing aspects of Borobudur's architecture is its hidden basement. In 1885, a Dutch architect named J.W. Ijzerman, while working on a restoration project at the monument, found cracks in the ground-level processional pathway that surrounded the base. Sensing a Howard Carter moment, he ordered the path to be excavated. There, under 16 layers of stone, he discovered sculptural panels that had been deliberately concealed for a thousand years. The 160 secret reliefs, as beautifully carved as those on the exposed, upper galleries, depict the workings of karmic law. Evil actions, from gossip to murder, are vividly portrayed alongside the hellish torments that punish them; virtuous actions are paired with their heavenly rewards. Explanations for why these panels were immured in stone range from the mundane (the first basement had to be shored up to prevent subsidence) to the mystic (with sufficient concentration, the adept might be able to read the reliefs through the stone).

Like its Egyptian predecessors, Borobudur poses many enigmas to archaeologists. One visionary, slightly mad aspect of its design is that the ground plan, visible only from an aerial perspective, is a perfect mandala, a symbolic schema of Buddhist cosmology that serves as an aid to meditation. Or perhaps the monument represents a lotus blossom, a nearly universal image in Buddhist art. In 1931, a Dutch artist named W.O.J. Nieuwenkamp proposed the whimsical theory that the plain surrounding Borobudur was once a lake, and the monument was conceived as a lotus flower floating on it. His hypothesis became less fanciful in 2000, when archaeologists found stratigraphical evidence of a paleolake in the area.

Borobudur received pilgrims from distant lands for about 200 years, until it was abandoned, apparently rather abruptly -- another enigma. Conventional wisdom in Indonesia holds that the monument's decline came with Java's conversion to Islam in the 1400s, but by then the great stone lotus had long since fallen into desuetude. It was never completely forgotten, but in the Islamic era it acquired a sinister reputation, and visits there were taboo.

By 1811, when the British began a brief period of sovereignty in Java, Borobudur lay hidden under volcanic ash and jungle vegetation. The new governor of the island, Thomas Stamford Raffles, just 30 years old, dispatched an expedition to locate and excavate the legendary monument, commencing the modern age of scholarship and study of Borobudur. A wave of restorations of varying degrees of ineptitude began at the turn of the 20th century, culminating in a thorough makeover from 1975 to 1982, sponsored by the Indonesian government and Unesco, that stabilized the foundation and restored all 1,460 sculptural reliefs to sparkling condition.

Today, Borobudur is once again thronged by visitors, many of them Buddhist pilgrims; saffron-swathed monks from many nations are always there in gentle flocks. Yet as an architectural celebrity, the monument remains strangely underexposed. Indonesia's tourism ministry reports just over a million visitors annually, including the domestic market, mainly high-school students bused in for the local equivalent of the senior-class trip. It's a paltry number compared with Borobudur's such Asian rivals in the world-wonder racket as Angkor Wat and the Taj Mahal, with which it easily holds its own. Yet true to the philosophy that built it, Borobudur rises serenely above such vain, earthly striving.

Mr. James is the author of "The Snake Charmer" (Hyperion), a biography of the herpetologist Joe Slowinski.