Buddhist monument in a dilapidated condition in Bihar

Kesaria, Bihar (India) -- Residents and pilgrims lamented the dilapidated condition of a Buddhist monument in Bihar, despite it being under control of the country’s archaeological department. 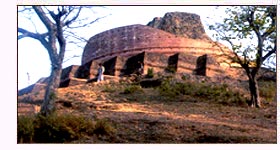 The Buddhist stupa, a mould-like structure of religious monuments located in Kesaria, about 110 kilometers from Patna, is a sought after destination for tourists and pilgrims coming to the state.

Considered highest in the country, the height of the stupa was originally measured to be 169 feet. But after an earthquake in 1934, its height got reduced. When last measured in 1998, the height was found to be 104 feet and 10 inch.

The residents say despite its distinction, the stupa remains neglected with the administration taking no steps to facilitate tourists.

“Tourists from across the country come here, but there is no provision of bathroom, water and tea. Many District Commissioners visited the place a number of times, but no work has started here as yet,” said Rajendra Singh, a resident.

Jairam Lal Meena, Commissioner, Tirhut Parimandal, Muzzafarpur however, said that they have taken note of the condition of the monument and had already submitted a report to the government to develop the site.

“We have made a number of plans in consultation with the officials of the archaeological department and officials of Patna for the development of this place. All these plans are related to the roads.
We are going to connect this area soon with the railway line, which will start from Vaishali and cover the entire Buddhist circle and go to Kushigaram and Sarnath in Varanasi,” said Jairam Lal Meena, Commissioner, Tirhut Parimandal, Muzzafarpur.

He further added that a plan which will involve an expenditure of 30 million Indian rupees aimed at developing the infrastructure in and around the place is in place.

In the early days of Buddhism, stupas were constructed to honour important events including Buddhas Enlightenment, his first Sermon, his Death and the four famous Buddhist councils.