Kyoto, Japan -- A research team from Kyoto's Ryukoku University has found traces of what's believed to be a Buddhist temple in a set of ruins near Maragheh in northwestern Iran, possibly marking a new frontier of expansion in the ancient Buddhist world. 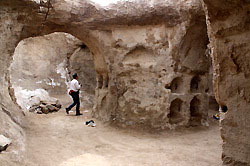 << The pillar in the underground complex near Maragheh, Iran. (Photo courtesy of Ryukoku University)

The team found a room containing an octagonal pillar, similar in construction to those found in other temples along the Silk Road, which worshippers would walk around as part of their prayers. They also found alcoves in the surface of the pillar, used to hold statues and other religious icons.

The site lies 1,400 kilometers west of another set of ruins found in Turkmenistan, currently believed to mark the western limit of the Buddhist sphere. The city of Maragheh was a former capital of the Il-Khanid under the rule of Genghis Khan's grandson Hulagu Khan.