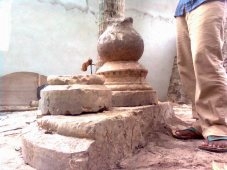 << Unearthed: the stupa in three parts

Yoosuf Adam, 50, from Gulhaam House, found the coral stupa divided into three parts, according to the Island Chief Mohamed Yoosuf.

“It looks like a pawn on a chess board,” said Yoosuf, the island chief. “The Indian teachers here believe parts were destroyed when Islam came to the Maldives.”

A stupa is a mound-like structure containing supposed relics of Buddha, once thought to be places of Buddhist worship.

Yoosuf said the stupa had been slightly damaged by the digging as the islanders did not know that it was beneath the ground.

He added other ancient relics had been found on the island since 1999. In 2003, large intricately-carved coral bricks were discovered when building the school and in 2006, a small statue of a Buddha was found.

But, said Yoosuf, the statue was stolen after being taken to the school for observation and the other relics have been destroyed as islanders were unaware of their historical significance.

It was only in 2002, he said, when incumbent President Mohamed Nasheed was banished to the island that residents learned of the importance of the artefacts.

“Since then they started exploring and at that time the president said there were seven graveyards beneath the island, which he read about in a book in a foreign library,” he said.

Ahmed Tholal, assistant director of the centre for linguistic and historical research, said officials from the centre planned a visit to the island next week to verify the find. While he warned it was too early to be optimistic, he said it appeared to be part of a Buddhist monastery.

“Based on what we see in the photos it looks like a pre-Islamic site but we can only confirm once we have seen it,” said Tholal. “It’s very well-preserved…maybe one of the best preserved sites that we have and that will help us open up to cultural tourism.”

On the discovery of the stupa he said, “I think these artefacts give us a glimpse of the old heritage we have and the history of us Maldivians as an ancient civilisation. We want to share this little known era of our history with the wider world.”

Very little is known about the Maldives’ Buddhist past which is believed to have been the dominant religion until the 12th century AD when Islam was introduced by Abul Barakat Yousef al-Berberi.

While the country's Buddhist past is acknowledged, the subject is a sensitive one as the Maldives operates within a strict Islamic framework.

But, said Tholal, the site will not be promoted as an "adversary to Islam" but as the "epitome of Maldivian culture".

A number of other Buddhist sites can be found dotted around the Maldives, such as on Laamu atoll Isdhoo.

In October 2008, a Rf 370,000 (US $29,000) programme to help preserve the archaeological site on Kaafu atoll Kaashidhoo – the site of a Buddhist monastery dating back to the 7th and 8th centuries – was funded by US government.