Bangkok, Thailand -- Many people know about the famous Silk Road, the West-to-East and vice versa route taken by Marco Polo and other Western explorers. However, very few people know there was a silk road through the south of Thailand that for centuries served foreign traders who transported goods by sea from the Greek and Roman empires to China and back. 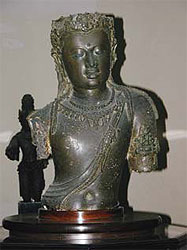 "The [Thai silk road] route started from a point on the west coast of Thailand on the shore of the Andaman Sea and ended on a southern shore of the Gulf of Thailand, in Surat Thani. Using this Thung Tuk-Laem Pho (Takua Pa-Ban Don Bay) route, traders did not have to sail along the Straits of Malacca, which was a longer route and full of pirates, to reach the South China Sea," said Capt Boonyarit Chaisuwan, an archaeologist at the 15th Regional Office of Fine Arts in Phuket.

He said in the first century the world's maritime trading routes, called the world system, linked Eastern Europe and India, Southeast Asia and southern China via the seas. Communities by the Andaman Sea in Southeast Asia, including those in the south of Thailand, became part of the system. They grew into port cities, or trading stations, that facilitated the exchange of local and foreign goods and cultures between India, China, the Middle East and the Roman Empire.

Among the trading stations in the south of Thailand were Phu Khao Thong in Ranong and Khuan Lukpat (Khlong Thom) in Krabi province. Both were major bead-making sites. Huge amounts of beads, especially monochrome Indo-Pacific beads, have been found there. So have ancient foreign artefacts like Roman carnelian intaglios, mosaic beads, face beads, glass wares, coins and stone inscriptions from India.

At Phu Khao Thong, many broken pieces of rouletted wares - black pottery with a delicate texture and unique striped prints similar to those found in Arikamedu, India - have been discovered. So has a rock crystal pendant engraved in the image of a Singha (lion) with bended front legs, a Buddhist symbol called Triratana, and a replica of the Buddha's footprint bearing traditional Indian motifs, Triratana and Svastika. At Khlong Thom, a stone Wheel of the Law (Dharmachakra) has been unearthed. These artefacts have convinced archaeologist Capt Boonyarit that Buddhism might have been introduced to this region even before the Amaravati period in the second to third centuries, contrary to previous beliefs.

Many sculptures of Singhas bending their front legs similar to that found at Phu Khao Thong have been found in Taxila in India. In 250BC, King Ashoka the Great spread Buddhism worldwide using Singhas, the Wheel of the Law, elephants and other symbols as insignias of Buddhism. This was before Buddha statues were first created in the Amaravati period.

The location of Koh Kho Khao provided good shelter where ships could moor during the windy season, and it later developed into a port on the west coast of the southern peninsula. The place was also called Muang Thong by locals.

Thung Tuk emerged as a major trading station after the development of sailing technologies that allowed sailors to not only travel along coastlines but to also traverse oceans. This port city, which flourished during the ninth to 10th centuries, was believed to be a resting point for traders and a market for local products, such as spices, wild products and probably tin, and goods from China, India, the Middle East and the West. Artefacts discovered there include domestic wares and beads, lustre glass ware from the Middle East and areas by the Mediterranean, Chinese ceramics and porcelain of the Tang period of about 618-907AD, Basra turquoise wares from Persia and beads from the Middle East and India, including eye beads and gold beads. Polychrome mosaic glass beads, luxury items found only in major port cities, have also been found there.

Also recovered at Thung Tuk were Hindu and Buddhist sculptures like Buddha images and an image of Ganesha. Remains of ancient establishments found there have architectural features and construction techniques that match those those discovered in the Bujang Valley, Malaysia. They include a rectangular earthwork, probably a reservoir, some ruined stonework, the pedestal of a shrine of Ganesha and the remains of a Buddhist monastery. These items reflect the various cultural practices of the people who lived in this ancient port.

"Thung Tuk was a port city, a contemporary of Laem Pho, by the Gulf of Thailand. Ancient artefacts found at both sites are similar, especially ceramics from the Tang period and glassware from Persia. On this route, the landmarks that still exist today range from Khao Phra Narai, Khao Phra Neur, Khuan Phunphin to Khao Sri Wichai and Ban Don in Surat Thani," Capt Boonyarit added.

He also noted that Khao Phra Neur in Takua Pa, Phangnga, is a small mountain at the delta of the Takua Pa River and opposite Thung Tuk. On top of this mountain lie the remains of a religious structure. A 202cm-high sculpture of the four-handed god Vishnu with a human-like anatomy has been discovered there. This indicates that people there worshipped the Hindu god Vishnu.

This statue was believed by art historian Pierre Dupont to be a part of Pallava art and dates back to the sixth and seventh centuries, while Cornell University historian Stanley O'Connor assigns it to the post-Gupta style of the late seventh to early ninth centuries.. The statue is now on display at the National Museum in Bangkok.

The next landmark, Khao Phra Narai or Khao Wiang, in Kapong district, Phangnga, is a small mound located at the spot where the Leh and Rommanee canals meet to become the Takua Pa River. Three religious sculptures, including a statue of a 2.35m-high four-handed Vishnu in a yoga posture, used to stand at its summit. So did an inscription stone in the Tamil language of southern India, which mentioned the digging of a reservoir. The three images, which resemble India's gods in the Pallava period according to historian Piriya Krairiksh, are now at the National Museum in Thalang, Phuket.

Another stop was Khuan Phunphin, or Khuan Saranrom in Phunphin district, Surat Thani, right at the confluence of the Tapi and Phumduang rivers. Here, the remains of a 7-metre x 7-metre relic, a statue of Bhodhisattavas, ceramic Buddha amulets, the head and body of Buddha statues, and silver Arab coins dating to 767AD have been recovered. The statue of Bhodhisattavas is now in the Lop Buri branch of the National Museum.

The next landmark, Khao Sri Wichai, or Khao Phra Narai, in Phunphin district, Surat Thani, is a solitary mountain on a plain, about 400 metres from the Phum Duang River. Here, the remains of eight religious structures have been recovered. So have a big statue of Vishnu dating to about the eighth century as well as ceramics from the Tang period in China and Persia, glassware, domestic ware and beads of various types.

The final destination on this route was Laem Pho in Chaiya district, Surat Thani province, and is believed to be the forbearer of the port city of Chaiya. Many pieces of archaeological evidence, including Tang-period ceramics from China, 10th-century Persian wares, Chinese coins dating to 618-627AD, local wares, beads, glassware, remains of ancient ships and artesian wells have been found there.

Capt Boonyarit thinks it is possible that all the trading stations along the shore of the Andaman Sea in southern Thailand were called by the name "Takola" and similar names. The names range from "Takola" as stated in Kampir Milinthapanha, a religious book that appeared prior to the first century; "Takola Emporion", a trading hub on the west coast of the Malay Peninsula, as stated in Ptolemy's Geography of Eastern Asia about 150AD; to the "Talaittakolam" appearing on an inscription stone in Tanjore, India.

Capt Boonyarit also believes this southern silk road might have been a major factor in both the glory and collapse of Chaiya, the capital of the Srivijaya empire during the seventh to 11th centuries. Archaeological evidence confirms that Chaiya and trading stations along this route existed during the same time period.

After several centuries of hustle and bustle, the trading stations on this route were abandoned. Various theories have been advanced for their decline and eventual end. First, the route might have become less popular because sailing through the Straits of Malacca had grown more convenient compared with the combination of sailing and walking to navigate this route. Second, trade might have been badly affected by China's policy to cease contact with foreign lands. Third, those port cities might have been sacked by Chola invaders as claimed in an inscription stone dug up in Tanjore, India.

"The southern silk road was important in ancient times, especially during the Srivijaya period, as a means of connecting two oceans and serving as an extension of the Malay peninsula," said Fine Arts Department director-general Grianggrai Sampatchalit. "If possible, we would like to nominate it as a World Heritage site as we think it deserves to be recognised as an important component of Asia's common cultural transition."