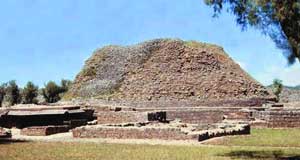 << The request was made after the two officials found illegal excavation and theft of the ancient artifacts from the Buddhist monastery. — File Photo

The request was made after the two officials of the federal department of archaeology and museums sub-regional office, Taxila, found illegal excavation and theft of the ancient artifacts from the Buddhist monastery.

In a report submitted to highups of Ministry of Culture, the officials said the stupa and the monastery had been badly damaged by the excavator s digging the sites with heavy equipment.

‘And, most probably they have also taken away two or three small statues of Buddha,’ the officials reported.

The officials said if the proper excavations under official patronage were carried out, it would not only help to preserve the cultural heritage but also promote tourism in this area where researchers, students of archeology, tourists and scholars from across the world come to visit the ancient civilisation.

It has been learnt that the police were informed by the local people about illegal digging and excavations and a police party reached the spot but did not stop the illegal activity.
Also, the sub-divisional police officer and SHO Hazro also reached the site and arrested 15 diggers but freed all of them after two hours without taking any legal action against them.

The report said SHO Hazro police station had misguided officials of the archeology department and did not tell the exact location where illegal digging was being done by the land grabbers.

They said the police were protecting the illegal diggers and asked the police highups to take action against those officials responsible for this situation.

When contacted, Muhammad Bhadur Khan, deputy director federal department of archaeology and museums, confirmed the massive destruction of the Buddhist site. He said a report of the illegal digging by influential mafia in league with the police had been submitted to the department headquarters and police authorities.

He strongly advocated for the preservation of the site from the illegal diggers who, he said, were bent on destroying the national heritage.