Timphu, Bhutan -- On March 3, Sonam Tshering, a Buddhist monk, was sentenced to three years in prison in the Himalayan nation of Bhutan. His crime? Trying to smuggle $2.50 worth of chewing tobacco into Bhutan from India. 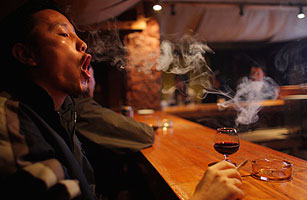 In January, Bhutanese police caught the 24-year-old carrying 48 packets of tobacco while traveling from an Indian border town back home. Tshering was detained for more than a month, and, after a week-long trial, found guilty by a district court of violating the country's stringent anti-tobacco laws.

Bhutan, a constitutional monarchy that transitioned from absolute monarchy in 2008, has recently put the world's strictest anti-tobacco legislation into action. Passed in June 2010 and implemented in January, the new law forbids the sale or smuggling of tobacco into Bhutan, and hands out jail sentences of up to three years to anyone caught smoking in a "restricted area," such as a bank. In both the cases, there is no chance of being granted bail.

While it's legal for residents and tourists over 18 to buy cigarettes outside Bhutan, any tobacco brought into the country incurs a 100-200% duty, and amounts are limited to 200 cigarettes, 30 cigars, or 150 grams of chewing tobacco. The accompanying import receipt, issued at the airport or at the border check post upon declaration, is valid only for a month, and must be kept at all times if a person wants to smoke in public, say while walking to a store or waiting outside a store, as evidence that the import tax has been paid and the tobacco was purchased for self-consumption - not to sell.

Bhutan's anti-tobacco enthusiasm goes back to December 2004 when it became the first nation in the world to ban the sale of tobacco. Two months later, smoking was banned in public places like pubs and restaurants. The law was not exactly the ruling of the government; it was proposed and passed by Bhutan's erstwhile unicameral parliament, a body in which, under the monarchy, ministers and people's representatives from across the country met twice a year to discuss progress and issues affecting Bhutan. Many of the representatives were from an older generation who said tobacco consumption was sinful and went against Buddhism and Buddhist values. Indeed, the country's most revered Buddhist saint, Guru Padmasambhava, condemned tobacco in his teachings and scriptures as long as the eighth century.

Authorities heralded the ban in December 2004 by igniting a bonfire of cigarette cartons in the capital, Thimphu, and stringing banners across the main thoroughfare, exhorting people to kick the habit. Bhutanese officials also said that, by banning tobacco, they hope to set an example for the rest of the world. The country made worldwide headlines and earned accolades from the World Health Organization (WHO). But things did not go as expected. Tobacco products started popping up in the black market and soon became a lucrative business with wider profit margin, being sold at 200% over the sticker price. In clubs and pubs, curious tourists lit up in solidarity with defiant Bhutanese, making a mockery of the ban. (See pictures of Bhutan's newest king.)

In 2010, six years later, embarrassed by the failure of the ban and the pressure to live up to the smoke-free image that it created in the eyes of the world, the newly democratic Bhutanese parliament passed the more stringent act that is in place today. It has, however, not gone down well with many smokers who have called the law, among many things, a blatant infringement of personal freedom and an attack on democracy. "This is an unjust, undemocratic and preposterous ban," says Kinley Shering, a Bhutanese media consultant who is also a smoker. Shering started a citizen's movement to amend the bill on Facebook - an unusual show of dissent in this young democracy. Opposition Party Leader Tshering Tobgay says the tobacco control bill is "draconian" and "dangerous" and has called for monk Sonam Tshering to be freed.

Since Tsherin'g sentencing, the Facebook movement has gathered momentum. Heated discussions are now underway among smokers and non-smokers alike to hold a mass protest in Thimphu, to which Prime Minister Lyonchhoen Jigmi Y Thinley has responded by issuing a public statement urging critics "to write or call" their members of parliament instead of "bringing in practices that are foreign to Bhutan." The country has never experienced a mass protest, save for a peaceful march organized last year by the media in protest of a botched rescue attempt by the government in which six young school boys were drowned. That march shocked and unnerved authorities, whose actions had never been challenged by the people before.

Though the government is rattled by the smoking ban criticism, it has yet to budge. In a Feb. 24 press conference, health minister Lyonpo Zangley Dukpa, who is also the chairman of the tobacco control board, dismissed the Facebook as a "movement of the smokers." "Given their background, which we know, some of them chain smokers - drug addicts even. How can these few people say that the movement is on behalf of the people of Bhutan when a majority of the Bhutanese are greatly opposed to tobacco use?" he asked.

True enough, Bhutan's smokers make up less than 10% of the national population of 800,000. The Prime Minister maintains that the law, while severe, is both the "will and desire" of the people, as well as for their own good. "It is the responsibility of the leaders to prevent its people from being the victims of the harmful effects of tobacco. The tobacco lobby has been far too powerful for too long."

When asked whether the sentencing of Sonam Tshering was too harsh, Mr. Jigmi said: "Three years or five years in the prison out of one's life is a lot, but if this deters and saves thousands of other Bhutanese from committing the same crime, then I say it is worth it. Sonam Tshering will be subject to what the law says he's guilty of."