Bon: Then and now

Timphu, Bhutan -- If Bhutanese really want to understand who we are as a people through our religious history and traditions, it may help that we learn about Bon as much as we do about Buddhism. As Samten G Karmay, a Bonpo Geshe and professor, who has written several books on the subject, says: “Bon and Tibetan - Buddhism are like two sides of the same coin – on viewing, one must also turn it over to see what is on the other side.” 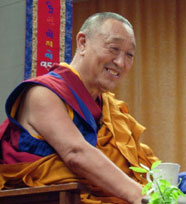 What one will find on the other side may help clarify why we in Bhutan have such a complex and ritualistic way of putting into practice the simple tenets of Buddhism.

There is little historical information about Bon and its founder Miwo Tonpa Shenrab before the Seventh Century. A lot of what is known about Bon today comes from scriptures written after that period. By then, it is said that Bon as a religion had not only transformed, it had also become more literary in trying to rival Buddhism, that had just been introduced in Tibet.

What is known about Bon in pre-Buddhist times though, according to studies, is that, like many ancient belief systems, their faith was rooted in the divinity of nature and the spirits that inhabited Tibet’s wild landscape. There were shamans and priests called gshen and Bon, who were links to the unseen world, who controlled the forces of nature by appeasing them through sacrifice and rituals to protect aristocrats and kings. But as the practice, beliefs and rituals varied between clans and places, an organized religion, per se, did not exist.

The country where Bon flourished was not even a part of Tibet at that time. It was a region called Shangshung, made up of western and northwestern Tibet, covering Ladakh and even parts of Simla. Mt. Ti-se, present day Mt. Kailash, was its centre. The region of Shangshung was partially open to the silk-route from where much of the outside influences like Bon entered.

Bonpos believe that the source of Bon teachings came to Shangshung from the land of Ol-mo lung-ring, a kind of a shambala or mythical land said to be in Tazig, present day Tajikistan, although some say it could be Persia. In the seventh century, the king of Shangshung, Lig-myi-rhya, who was married to the sister of King Songtsen Gampo (649), was assassinated and the country annexed to Tibet. Some say the annexation happened later in the time of King Trisong Detshen (742). Whatever the story, Shangshung eventually became a part of Tibet, a country that became a powerful force in central Asia, just when Buddhism was also beginning to make its way into that region.

B L Bansal, author of Bon: Its encounter with Buddhism in Tibet, says that Buddhist promoters in Tibet were very cautious seeking permission and patronage from the kings. But it was forthcoming as Buddhism “was a more humanizing force for an otherwise rough and warlike people.” Buddhism also seemed to be more egalitarian than Bon, which at that time subscribed to animal and human sacrifice. As a result, Bon practitioners suffered discrimination and even persecution. While some fled to other regions in the Himalayas, including Bhutan, others were banished to eastern Tibet. Those who remained were forced to convert. This led to an era where Bonpos hid their texts to save them from destruction. Karmay says that there is a difference between the Bon and the Nyingmapa tradition of hiding these termas. “Padmasambhava and his disciples are said to have hidden religious texts because their followers were not yet spiritually mature to understand them,” while “Bonpos had no choice but to conceal them.”

The famous Dunhuang manuscripts, Buddhist texts that were discovered in a cave along the silk route in the 1900’s, contained some information about this era. According to Karmay, one of these was an attempt to “incite non-Buddhists to take up Buddhism.”

The text, he says, warns ordinary men against mu stegs, non-buddhist or Bonpos, and advises them not to believe in the mo bon, Bon priest. The text also warns against worshipping certain categories of beings like dre, srin, bdud, and bgegs.

After its entry into Tibet during King Sontsen Gampo’s tenure, Buddhism continued to be challenged by Bon as the people’s belief in rituals and spirits were deeply entrenched. But by the time King Trisong Detshen came to power, Buddhism would gain a stronghold in Tibet with his invitation of great Indian saints like Santaraksita and Padmasambhava. He also built many Buddhist monasteries including Samye.

Padmasambhava, it is said, played a crucial, if not political, role bringing religious order to Tibet by subduing the dres, srins and bduds. Bansal says: “The Tibetans, who were steeped in superstition and felt themselves besieged on every side by malignant devils, welcomed the Guru in the fervent belief that he had brought them deliverance from their terrible tormentors.” Padmasambhava is also credited with leaving a special mark on Tibetan Buddhism, especially the Nyingmapa sect. Buddhism, which had already been assimilating practices and rituals from Bon, and vice versa, was now influenced by these new Tantric teachings.

Bon adherents were not to be outdone though. They began discreetly translating Bon texts from the Shangshung language to Tibetan. They also began laying down their philosophical beliefs, by then already influenced by Buddhism, into writing. Some of these were also hidden.

When King Lang Darma came to power (836-42), Karmay says, Buddhism began to suffer a decline because the Buddhist clergy became hungry for more political power so the king reacted by persecuting them. It seems that the religious and political struggles eventually weakened the powerful country and both religions suffered setbacks when the king was murdered. What followed was a Tibet fragmented into principalities and into different sects of Buddhism.

By the eleventh century, as different sects of Buddhism grew, so did Bon which, by then, had become a fully organized religion with its own works of kanjur and tenjur. According to Per Kvaerne, a professor of History of Religions and Tibetology at the University of Oslo, the life of Tonpa Shenrab echoed similarities with that of Buddha Shakyamuni and even with that of Ling Gesar. But social discrimination against them persisted.

In 1679, the fifth Dalai Lama became the first ruler to embark on a “policy of reconciliation,” between Bon and Buddhists, says Karmay. A decree made Yungdrung Bon, Everlasting Bon, an essential esoteric teaching. After the Fifth Dalai Lama’s rule, however, “the Gelug theocracy gradually fell into the hands of fundamentalists and joined the cult of Shugden.” The reconciliation process reverted to where it was before, with hostility towards Nyingmaps and Bonpos. This attitude and situation remained unchanged until 1959.

Some time in 1988, the Fourteenth Dalai Lama visited the Bon Menri monastery in India, where the Bonpos had relocated to promote religious tolerance. “On this occasion, he graciously put on the Bon religious hat and held the sceptre of Tonpa Shenrab Miwo to show that he embraces the religion as did his predecessor,” writes Karmay.

While this is more about Tibet, our religious history is so intertwined with theirs, it may help to understand our belief systems better. In the end, despite the volatile and difficult history, it is good to know that both religions survived – not unscathed – each emerging very much like the other, yet with their own identities.