Dharamshala, India -- Presiding over the World Buddhist Leaders Council, organized by the Maha Bodhi Society of India, His Holiness the Dalai Lama lauded the ongoing efforts to establish an International Buddhist Zone. 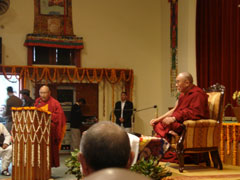 << Director Geshe Ngawang Samten presenting a report on the works of the institute.

In his address to the Buddhist leaders from some 15 countries yesterday morning at Sarnath, His Holiness also reiterated the need to promote harmony between the major world religions.

Promotion of harmony and better understanding among various religious traditions has been one of what His Holiness has often said are his three main life-long commitments.

The other two commitments are to serve humanity by advocating inner qualities and to serve the interest of the Tibetan people.

In the evening, His Holiness addressed some 500 students and staff of the Central Institute of Higher Tibetan Studies (CIHTS) assembled at the institute?s Atisha Hall.

In his address, His Holiness emphasized that the students must not only excel in religious fields of study, but also undertake studies in the field of modern science.

His Holiness the Dalai Lama today begins a three-day teaching on The commentary of Bodhicitta by Nagarjuna (Jangchup Samdrel), at the CIHTS.

Some 7000 devotees from across the globe are expected to attend the teaching jointly organized by the CIHTS and the Foundation for the Preservation of the Mahayana Tradition.

The last time His Holiness gave this teaching was in 1990, when His Holiness conferred his 14th Kalachakra empowerment at Sarnath.