Colombo, Sri Lanka -- World history finds its greatness and attraction through the services rendered by philanthropists. A person whoever he is achieves greatness through ideologies borne in his mind and to the extent of effectiveness and favourable consequences resulting therefrom. 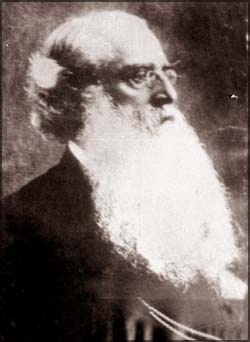 If there was any person who was capable of uplifting the Sinhala Buddhists who were helpless due to colonial rule, although their forefathers enjoyed sublime virtues enriched with the advent of Arahath Mahinda. His achievement in reestablishing a golden era in this country makes really great and sublime. February 17th marks the 102nd death anniversary of Col. Henry Steele Olcott who was able to create history through his revival of Buddhism in Sri Lanka.

He clamoured and awakened a nation that was fast asleep without any vigour to rise up. He was the pioneer who agitated to give due place to Buddhism and the reformer who compelled the colonial government that existed at that time to declare the Vesak Full Moon Day, a public holiday. He was the architect who designed the six coloured Buddhist Flag that has gained universal recognition.
National Schools

He was the pioneer who was responsible for the establishment of National Schools such as Ananda College. Col. Olcott, whose contribution towards the betterment of our country, nation, religion, justice and good conduct has been so great, therefore remains in our hearts forever.

His motto was "The best religion is nothing but the truth." He established the Theosophical Society at New York in America on the 17th November 1875 towards the achievements of his goal.

As a result of his endeavour towards justice, good conduct, universal fraternity and freedom many erudites around the world gathered around him. We have to record our highest gratitude to Madam Helena Blavatsky who assisted him in all his endeavours.

Col. Olcott was an American. However when we look into his clan, we note that his parents were English and had migrated to America. He was the eldest of a family of six siblings. This great child was born on August 2, 1832.

As an enthusiastic scholar, his research in agriculture in particular paved way for him to become the Head of a Department at Athens University of Greece. However he declined to accept this honour and instead he established an educational institution in agriculture because he preferred to serve his mother country.

During the American Civil War, he joined the army and through his achievements was appointed colonel. American government appreciated his bravery and sharp wisdom, appointed him commissioner to investigate and report on corruption in the American army. He performed this task very well.

For some time he practised as a lawyer. Although he was a Christian by birth, came across a copy of the Panadura controversy by Rev. Migettuwaththe Gunananda Thera, in Ceylon. He who was in search of the Truth and found it in Buddhist philosophy highlighted in this famous controversy.

Col. Olcott made an extensive study of Buddhism. Consequently with a team of people, including Madam Blavatsky came to Ceylon (then) on May 17, 1880 and at Vijayananda, Pirivana at Weliwatta Galle, Col. Olcott and Madam Blavatsky became true Buddhists by accepting the triple Gem and observing Panchaseela, from Rev. Akmeemana Dharmarama Chief Monk.
Plight

Through his close association with intellectuals such as Rev. Hikkaduwe Sri Sumangala, Chief Monk, Rev. Miggattuwatte Gunananda Thera and Rev. Waskaduwe Sri Subuthi Thera, Col. Olcott realised the sad plight of the Sinhala Buddhists at that time. Considering the gravity of this, he thought of the need to unite and create a formidable workforce to act fast.

He realised the need to provide Buddhist children with an appropriate Buddhist environment through a systematic objective, he established the Colombo Buddhist Theosophical Society on June 17, 1880.

He thought that the future prosperity of the nation will depend on the good conduct and education of the living children, and therefore purchased a building at Maliban Street, where the Colombo Buddhist Theosophical Society office was established and subsequently used the same building where an English school was established with 37 children. W. Lead Beater was appointed Principal.

Mr. Lead Beater, an Englishman, provided education free of charge till 1889. After 1889 A.E. Bultjourns was appointed principal and when the number of children increased and the school was shifted to Maradana, present day Ananda College which became one of the foremost colleges in Sri Lanka, found its beginning's at a small hall in Pettah. This was through the foresight and wisdom of Col. Olcott. Colombo Buddhist Theosophical Society was able to establish many Buddhist schools.
Pride

With a sense of pride we have to point out to the country that as a result of pursuing the thinking of Col. Olcott, Colombo Buddhist Theosophical Society was able to establish 460 Buddhist schools, including leading colleges such as Ananda, Nalanda, Dharmapala, Dharmaraja, Visakha and Musaeus College.

Amid various adversities, difficulties, obstacles, great men like Col. Olcott who directed towards advancement at a stage when Sinhala Buddhists had forgotten their good culture and traditions, it is our duty to commemorate them with a sense of deep gratitude.

Younger generation in particular must be knowledgeable about the excellent qualities of this great leader, about his life and history and follow his path leading to advancement of our country.

When we remember the fact that great schools of learning such as Ananda, Nalanda and Dharmaraja produced national leaders and other country and also when we remember that colleges for ladies like Musaeus and Visakha produced heroic mother for the country, we can imagine that the get they blessings and grace of Col. Olcott who may be at a higher place in the universe.

Our nation was gifted with heroines and heroes, such as Viharamaha Devi, Dutugemunu, Parakramabahu the Great. We can remember the manner in which even great person like Anagarika Dharmapala was brought to the forefront with the able guidance of this rare type of great men like Col. Olcott and in that we observe that differences such as religion, race or caste or black or white are not at all barriers, when such great men go in search of the Truth.
Faith

Col. Olcott made every endeavour to awaken the Buddhists and to impress English rulers to prove that Sinhalese are a great race, although he belonged to a different faith.

He embraced Buddhism and Sinhala people. Every Sinhalese in the past, present and future is indebted to him.

Finally at a time he was able to see that his efforts have become fruitful, he became very happy and expressed his sentiments before Rev. Hikkaduwe Sri Sumangala Chief Monk, whom Col. Olcott considered as teacher.

"Seeds have been sown. These have grown and become large trees, my dear Rev. Sir no one on this earth or above can stop its growth and fruition in the future."

The Colombo Buddhist Theosophical Society, their founder Col. Henry Steele Olcott had made arrangements to start conservation work of the old building where Col. Olcott lived and used as Old Ananda College by Minister of Cultural Affairs and National Heritage.
TOP