Tokyo, Japan -- In the aftermath of the terrible earthquake and tsunami in Japan, much has been written and said about how the people of that nation have coped with the disaster -- how calm, stoic, patient and tranquil they are despite thetragedy that befell them. 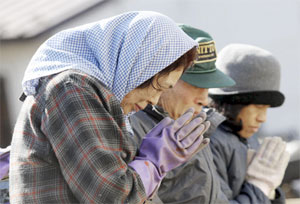 << Survivors pray for victims at the devastated city of Miyako, northeastern Japan - (from newsobserver.com)

Where do these attitudes come from? From their history, geography and culture, of course. But it also comes from their religion.

Although Japan is a thoroughly secular country, it is infused with Buddhist and Shinto thought. More than 90 per cent of Japanese claim to be adherents of one, or both, of these ancient religions, with most identifying as Buddhists. (Only about two per cent of the country is Christian.)

When disasters occur around the world, it is common to hear people who come from the Christian tradition asking why such a thing could occur -- how could God let something like the earthquake and tsunami happen?

But that isn't a question asked by adherents of eastern religions such as Buddhism and Shinto. For them, what caused the disaster isn't the important thing. What's important is to be positive, affirming and persistent in the face of adversity.

"Natural tragedies are part of living on the planet," says Fredrich Ulrich, senseiof the Manitoba Buddhist Temple. "Its geology and geography make such recurring tragedies inevitable. There is no need to think we have been targeted by a god of some sort."

What's important, he says, is how people respond to tragedies such as the earthquake and tsunami.

"It's what we do about them, and to each other, that'simportant," he says. "We face death with sadness, but not with terror. We bury the dead and honour them, then get about the work of rebuilding the community."

Similar thoughts were shared by Shravasti Dhammika, a Buddhist monk from Australia.

Reflecting on the 2004 Southeast Asian tsunami, he asked: "How does Buddhism explain natural disasters like the tsunami? In a sense it does not have to explain them. It is only belief in an all-knowing, all-loving and all-powerful God that compels us to try to explain and explain away all the evidence that seems to contradict this belief."

When God is taken out of the picture, he says, "the answer is really very simple. The universe does not conform to our desires and wishes. It takes no notice of us and our aspirations."

"We live in a dynamic universe and sometimes events are to our benefit, and at other times to our detriment. That's the way the world is."

Buddhism, he adds, "is not concerned with explaining why this is so. It simply makes the common sense assertion that the universe is sometimes at odds with our dreams, our wishes and our desires."

A poem that seems to capture these sentiments is Unbeaten by Rain by Miyazawa Kenji, one of Japan's best-loved authors and poets. The poem -- which is "almost the national poem of that country," according to Ulrich -- illustrates the Japanese attitude of calm stoicism that we are observing in the face of the disaster.

Free from greed
Without any anger

Always serene
With a handful of brown rice a day

Miso and a small amount of vegetables suffice
Whatever happens

Consider yourself last, always put others first
Understand from your observation and experience

In the East, if there is a sick child
Go there and take care of him

In the West, if there is an exhausted mother
Go there and relieve her of her burden

In the South, if there is a man near death
Go there and comfort him, tell him "Don't be afraid"

In the North, if there is an argument and a legal dispute
Go there and persuade them it's not worth it

In a drought, shed tears
In a cold summer, carry on