Tokyo, Japan -- The Shoeizan Ryohoji temple tucked away in a residential area in western Tokyo has more than 400 years of history. But until a few short years ago, many locals didn’t even know the Nichiren Shu sect Buddhist temple was there. 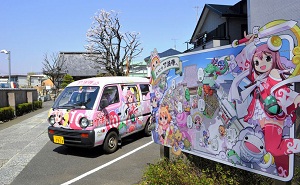 << The temple’s information sign adorned with 'moe' characters was erected in 2009. Since then, various items in the precincts of the Ryohoji temple in the Hiyoshicho district in Tokyo's Hachioji have been made into moe characters. (Yusuke Kato)

Five years ago, a temple priest decided to erect an informational sign with cute anime-inspired characters that could become objects of "moe" (strong affection). Nowadays, visitors, many of whom are young anime fans, are flocking to the Ryohoji temple in the Hiyoshicho district of Hachioji, Tokyo.

The Shoeizan Ryohoji temple enshrines Benzaiten, one of the seven deities of good fortune, and Kishimojin, the goddess of easy delivery and child rearing.

Until the new sign was erected, most of the visitors who came to the temple were elderly. Chief priest of the temple, 49-year-old Nichiko Nakazato, began thinking of a new sign that would attract more attention. He envisioned the temple as a local gathering place where people of all ages could communicate and share ideas.

Soon, however, compliments of “adorable” and “nice” started pouring in from local residents and other priests who did not know much about moe culture.

In May 2009, Nakazato went ahead and posted the informational sign because “Buddha guided me to do so,” he said.

He has only received two complaints since erecting the sign.

The temple has also grown in popularity via the Internet. On one day, the temple received 300 visitors.

Nakazato said the increase in visitors to the temple has been rewarding because he has been able to help many people.

One time, he met a young man who confessed to not having any self-confidence. Nakazato told the man, as a child of Buddha, he has been blessed since birth, and that the hard times that fall on him are the experiences needed to undergo the never-ending circle of life and death.

Takanori Sano, a 43-year-old part-time employee from Hachioji who loves the “Pretty Cure” anime franchise, first visited the temple three years ago after becoming interested in the temple’s sign. He came to appreciate the chief priest’s friendliness and the Buddha’s teachings. Sano now serves as a volunteer guide at the temple.

Many visitors wanted mementos of their visit to the temple, so lucky charms and “ema” (wooden prayer plaques) inspired by the moe characters were created.

A figure of the anime-inspired Benzaiten was also dedicated to the temple.

About 30 people visit the temple each day.

On May 25, a cosplay event involving participants clad in the costumes of anime characters will be held in the precincts of the temple.

“My motivation has been heightened with the increasing number of visitors to the temple,” Nakazato said. “I am having good experiences and finding better ways to impart Buddhist teachings to those who are unfamiliar with them.”