NAHA, Japan -- Buddhists clasp their palms together to pray for enlightenment, but Conan, a chihuahua, appears to have more worldly motivations. 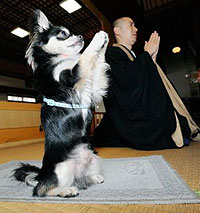 The dog has become a popular attraction at a Japanese temple after learning to imitate the worshippers around him.

"Conan started to pose in prayer like us whenever he wanted treats," said Joei Yoshikuni, a priest at Jigenin temple on the southern island of Okinawa.

"Clasping hands is a basic action of Buddhist prayer to show appreciation. He may be showing his thanks for treats and walks," he said.

Conan, a two-year-old male with long, black hair and a brown collar, sits next to Yoshikuni in front of the altar and looks right up at the statue of a Buddhist deity.

When the priest starts chanting and raises his clasped hands, Conan also raises his paws and joins them at the tip of his nose.

Visitors to the temple look on with curiosity.

"It's so funny that he does it," said Kazuko Oshiro, 71, who has frequented the temple for more than 25 years.

"He gets angry when somebody else sits on his favourite spot. He must be thinking that it's his special place," Oshiro said.

Conan, originally a temple pet, has become so popular that people come in to take pictures almost every week, the priest said.

Yoshikuni estimated that the temple receives 30 percent more visitors, especially young tourists, than it would otherwise.

"I'm glad that people feel more comfortable visiting the temple because of Conan," he said as he jokingly joined his hands and bowed to the dog.