Nagano, Japan -- At an informal discussion with over 200 Buddhist priests, His Holiness the Dalai Lama said Japan with its highly developed scientific knowledge combined with its ancient Buddhist tradition can produce Buddhist scientists. 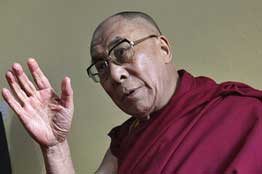 He said Japanese Buddhist practitioners should engage in dialogues with scientists to explore areas where science and religion can find a common ground i understanding universal values like compassion and kindness. In the last few years, secular dialogues between Tibetan Buddhists and Western scientists have attracted attention to the role of meditation in creating balance between mind and body. Research has shown that a calm mind reduces stress and blood pressure. Quoting another scientific study, he said when one develops anger, things looks very negative and 90% of that negativity is just one’s own mental projection which is just illusion and unrealistic.

He said while modern science has made unprecedented contribution to material development, Buddhist science of training an agitated mind through meditation and warmheartedness is far more advanced than the former.

“Meditation is a healthy way to develop a calm mind. You don’t have to use injections or drugs to achieve peace of mind,” he said. Interests in Buddhist science, which has little to do with abstract and esoteric notions of religion like after-life, has grown over the past years as scientific findings increasingly point to the inherent connection between physical and emotional well-being, he said.

In the United States, universities of Stanford, Wisconsin, and Emory have already established programs to study the development of a peaceful life. Tibetan monks in India now study modern science in addition to regular Buddhist curriculum. All western scientists interested in Tibetan Buddhism were either Jews, Christians or non-believers, he said, but Japan with its background in Nalanda tradition of Buddhism that emphasizes logic and investigation in reaching the ultimate reality has the potential contribute a lot in such secular dialogues.

According to Ven. Yukai Shimizu, an official with Zenkoji Temple, this exchange of ideas between His Holiness and Japanese priests on Buddhism which was held at the convention hall of Kokusai Hotel is a “once-in-a-lifetime opportunity” because not many Japanese priests get such forums to discuss and debate. “It’s a great opportunity for them to learn from His Holiness,” he said.