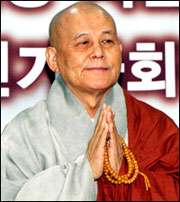 Seoul, South Korea -- A revered Buddhist monk here in Korea, the Venerable Ji-kwan, has passed away at the age of 79 after battling chronic asthma for many years.  More

Ven. Ji-Kwan, head of the Jogye Order from 2005 to 2009 dies after long illnessSeoul, South Korea --  Leading Korea Buddhist leader, Ven. Ji-Kwan, has died on Monday evening after a long illness. He was 79.  More 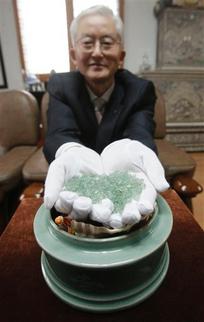 << In this Wednesday, Oct. 12, 2011 photo, Kim Il-nam, a retired high school principal, displays beads made from his father's ashes during an interview in Icheon, South Korea. Kim dug up his father's grave, cremated his bones and paid $870 to have the ashes transformed into gemlike beads. "Whenever I look at these beads, I consider them to be my father and I remember the good old days with him," Kim said. (AP Photo/Ahn Young-joon)

Kim is not alone in his desire to keep a loved one close — even in death. Changes in traditional South Korean beliefs about cherishing ancestors and a huge increase in cremation have led to a handful of niche businesses that cater to those who see honoring an urn filled with ashes as an imperfect way of mourning.

"Whenever I look at these beads, I consider them to be my father and I remember the good old days with him," a gray-haired Kim, 69, told The Associated Press in a recent interview.

"As a little boy, I often fell asleep while being hugged by my father," he says, sobbing and gazing at the blue-green beads, which sit on a silk cloth in a ceramic pot on a table.

A decade ago, six out of every 10 South Koreans who died were buried, a practice in line with traditional Confucian instructions to respect dead ancestors and visit their graves regularly. Since then there has been a big shift in South Koreans' thinking about the handling of the deceased, in part, officials say, because of Western influence and a strong government push for citizens of this small, densely populated country to consider cremation as a way to save space.

The government cremation campaign included press statements, pamphlets and radio broadcasts. A law passed in 2000 requires anyone burying their dead after 2000 to remove the grave 60 years after burial.

The results have been dramatic: The cremation rate last year was so high that only 3 in 10 were buried.

About 500 people have turned their loved ones' ashes into Buddhist-style beads at Bonhyang, a company based in Icheon, just south of Seoul. It and several other ashes-to-beads companies say they have seen steady growth in their business in recent years.

Bonhyang founder and CEO Bae Jae-yul says the beads allow people to keep their relatives close to them, wherever they go. He also says stored ashes can rot, a claim denied by crematoriums. "Our beads are clean; they don't become moldy and don't go off and smell bad," he says.

Bae uses ultrahigh temperature to melt cremated ashes until they are crystalized and can be turned into beads in a 90-minute process. The colors are mostly blue-green but sometimes pink, purple and black.

The ashes of one person can produce four to five cups of beads, Bae says, although the ashes of young people have a higher bone density that can yield up to eight cups of beads.

Bae isn't the first to use the technology in South Korea.

A meditation organization obtained similar bead-making technology in the late 1990s, but it was imperfect and wasn't long in the public eye, Bae says. He says he saw the potential, bought the technology and spent several years refining the process.

Bae believes his company has an important edge over rivals. His beads are made purely from human remains with no added minerals, which he says other companies blend in.

Mikwang officials say they have more business than Bonhyang but refuse to disclose their profits. Bae also refused to disclose business details. No special government license is necessary to start an ashes-to-beads business, according to the Health Ministry, which says individuals have the right to determine how to dispose of loved ones' remains.

The fledgling industry has drawn some criticism.

"They are only interested in making business profits," Do Young-hoon, a researcher on South Korea's funeral culture, says. "The highest level of respect for the dearly departed is to let them go back to nature."

Businesses turning the dead into beads were launched in the United States, Europe and Japan in the past, but were mostly unsuccessful because few people regarded it as a normal way to dispose of dead bodies, says Park Tae-ho, chief researcher at the Korea National Council for Cremation Promotion, a Seoul-based civic group.

Bae's customer Kim, a retired high school principal, says it took some time to persuade his family to accept his plan to honor his father "because they thought a ghost could come to our home along with these beads."

Every morning, Kim, a Catholic, prays to his father's beads, which he keeps on a bookshelf. He takes some beads with him in his car and has also given some to his five daughters.

Despite loyal clients like Kim, Bae says he is still years away from seeing a profit, partly because of the emergence of copycats. But he still feels confident about his business when he sees his customers' delighted reaction to the product.

"People are moved," Bae says, "and I feel it's something worthwhile. I'm confident this business will flourish considerably someday."

Bae says seven Buddhist temples and one Catholic church lease his bead-making machines. He is also negotiating deals over his technology with dozens of other religious organizations in South Korea, and with businesses in China, Thailand, Japan and the Philippines.

Ashes-to-beads businesses could also get a boost when South Koreans take advantage of next year's quadrennial leap month in the lunar calendar to conduct cremations. There's a traditional belief that the ghosts that supervise humans go on vacation during a leap month, so many people in South Korea don't feel sinful for relocating graves or digging up their relatives for cremation.

Kim plans to exhume his mother and make beads from her remains next year.

"I've also told my daughters I want my ashes turned into beads," he says.