SEOUL, South Korea -- On June 7 and 8, 2007, in many places in Korea, people claim to have seen Udumbara flowers. In Buddhist scriptures, the Udumbara blossoms every three thousand years and is believed by Buddhists to be a sign of an overwhelming blessing and good fortune. 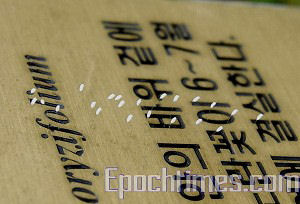 << In a garden located on the roof of a district court building west of Seoul, Korea, 22 Udumbara only 0.2" in a cluster blossomed on a nameplate. (Kim Guk Hwan/The Epoch Times)

The first time Udumbara appeared was in 1997. According to the chronicles in Buddhist scriptures, by 1997, it's been 3024 lunar years since Buddhism first emerged.

On June 8, 2007, west of Seoul, 22 Udumbara were found on a name plate in a garden located on the roof of a district court next to the director's office. Employees in the court appeared to be excited about "the good things that are about to happen."

The same day, about a dozen Udumbara blossomed on a window in a university in Noryangjin-dong, Dongjak-gu, Seoul. Kim Yeong Deok, Director of University Affairs, said it's an overwhelming blessing for the university.

On June 8, 48 Udumbara were found west of Kwangju City.

According to the Buddhist scriptures, Udumbara is an imaginary flower that only blossoms every 3000 years when the King of Falun comes to the human world. According to the Fahua Text, a scripture that explains the Fahua Sutra, Udumbara appears every three thousand years. Huilin Yinyi, a collection of Buddhist sutras, claims this heavenly flower is a sign of rare preciousness and a miracle. 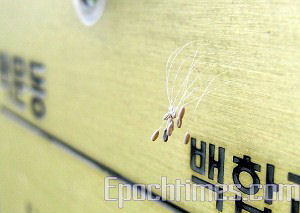 On another nameplate in the garden, seven to nine Udumbara appeared in two separate spots. (Kim Guk Hwan/The epoch Times)  >>

The earliest Udumbara found in Korea was in July 1997 on a golden brass Tathagata sculpture in a Buddhist temple in Kyungki-Do. There were 24 Udumbara measuring 0.1 inches found on the chest of a Tathagata (Buddha) sculpture. Hundreds of people rushed to the temple to watch the rare appearance.

In May 2005, Udumbara was found in a thousand year-old temple, Sumi Zen Temple, located in Gyeongju City, Korea. Kim, a Zen Master, from the temple said he didn't know what they were when he first found them. He tried to wipe them off but they stayed. He observed them and realized they were plants with blossoms, stems and roots.

Some biologists claim the plants found in Korea are actually eggs of lacewings, an insect. But in Korea with a quarter of the population being Buddhists, people believe that they are the legendary Udumbara that appear every three thousand years.