Long-Delayed Show of Buddhist Art From Pakistan Is to Open

A long-planned exhibition of nearly 70 pieces of Buddhist art from Pakistan will finally open at Asia Society on Aug. 9, after political intrigue in Pakistan and a breakdown in American-Pakistani relations delayed it for six months.

New York, USA -- Anti-Americanism, which soared in the aftermath of the killing of Osama bin Laden, helped put the show in jeopardy, said Melissa Chiu, the director of Asia Society Museum. The death of a major advocate, Richard C. Holbrooke, the Obama administration’s senior diplomat for Pakistan and a former chairman of Asia Society, also complicated matters, she said, as did problems with getting American visas for the Pakistanis chosen to accompany the objects to New York. 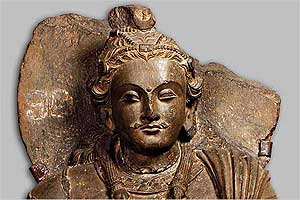 Shows that depend on loans from abroad are often fraught with difficulties, with museum directors jealously guarding national treasures. Exacting negotiations that stretch to the 11th hour are commonplace. But never before has the society announced a show, chosen an opening night and then been forced to postpone it.

The obstacles became so intense that at times the exhibition, devoted to the splendors of the ancient Buddhist civilization of Gandhara that flourished in northern Pakistan 2,000 years ago, almost foundered. Ms. Chiu said her argument to Pakistani authorities — that showing the antiquities in New York could help counterbalance the image of Pakistan as the world’s most dangerous place — was a tough sell.

“I persisted because this is a unique opportunity for us to show the cultural heritage of Pakistan at a time when U.S.-Pakistan relations are probably at their lowest ever,” she said.

The exhibition was of particular importance, Ms. Chiu said, because Asia Society views its role as reaching beyond the display of art to encourage a broader understanding of Asian cultures. Moreover the sculpture, architectural reliefs and works of gold and bronze in the show, which were produced from the third century B.C. to the fifth century A.D., are poorly represented in American museums. The last exhibition devoted to Gandhara art in the United States was at Asia Society in 1960.

The first sign of trouble appeared in January, a little more than a month before the scheduled March opening, when it became clear that federal authorities in Pakistan’s capital, Islamabad, had not informed the museums in Lahore and Karachi, where the Buddhist objects were kept, of the plan to fly them to New York, Ms. Chiu said.

Officials at the Culture Ministry were reluctant to allow the Gandhara treasures out of the country, least of all to the United States. They were particularly opposed because there had been recent exhibitions of Gandhara art in Bonn, Zurich and Paris, she said, and they did not want the objects to be outside Pakistan for another extended period so soon.

An added complication arose when a new law handed the power to make decisions on art loans to foreign countries from the central ministry to the provinces where the museums were located.

On a hurried mission to Lahore, in Punjab Province, in January, Ms. Chiu knew she needed to persuade the chief minister of the province, Shahbaz Sharif, who is not an easy figure to see on short notice. Just weeks earlier her longtime local ally in organizing the show, the governor of Punjab, Salman Taseer, had been killed by an extremist bodyguard. And while she was there, a C.I.A. operative, Raymond A. Davis, shot two Pakistanis on a Lahore thoroughfare, stoking anti-American sentiment in the city and across Pakistan.

With some fast networking among the Lahore elite, Ms. Chiu found a new ally in a patron of the arts, Nusrat Jamil, who opened doors to Mr. Sharif. “The meeting was confirmed at 1:30 a.m., and I saw him at his house at 9 a.m.,” Ms. Chiu said.

Mr. Sharif was supportive but said the decision was up to the board of the Lahore Museum, Ms. Chiu said. She then arranged to lobby all 10 members. They voted in favor, a victory that ensured the arrival of the star piece of the show, an intricately carved stele called “Vision of a Buddha Paradise.”

On a second visit to Pakistan in April to firm up a late-spring opening, Ms. Chiu discovered that date would have to be postponed as well. The authorities in Karachi had yet to sign the papers to release 17 objects from the National Museum of Pakistan there. As she waited for Karachi to sign off, the killing of Bin Laden on May 2 escalated the anti-American feelings in Pakistan even further, and added to the nervousness at Asia Society about whether the show would ever come to pass.

The latest on the arts, coverage of live events, critical reviews, multimedia extravaganzas and much more. Join the discussion.

Then trouble loomed on the home front. A State Department travel advisory warning American citizens against traveling to Pakistan meant that Asia Society could not send some of its staff members to accompany the works on the flights back to New York, a typical procedure for bringing art from abroad to the museum. (Ms. Chiu could travel to Pakistan because she has an Australian passport.) Visas for the Pakistanis flying with the art were held up at the American Embassy in Islamabad, a bottleneck that was resolved in the office of Secretary of State Hillary Rodham Clinton, Ms. Chiu said.

The packing and loading of the objects in Karachi was not simple, either. A chaotic city saddled with prolonged power shortages, Karachi had been in the midst of a spasm of ethnic killings when the German company hired by Asia Society to crate the objects began work early this month.

Members of the museum staff, too scared to use public transportation, had to be taken in hired cars from their homes to the museum to help wrap and load. A generator at the museum supplied power for lights for the packers, and the Germans used their own satellite phones to report their progress to Ms. Chiu in New York, she said.

The early August opening of the show was guaranteed only when two planes loaded with the precious cargo, one from Lahore, the other from Karachi, landed in New York last week. The chances that Americans can go to Pakistan to see Gandhara art — either in the museums or at open-air archaeological sites around Peshawarc, the northwest city where the civilization was centered — are very slim, Ms. Chiu said, making her feel all the luckier to have gotten the works here for the show’s three-month run.