Recitation of Sacred Buddhist Texts in Ladakh on UN List

Leh, Ladakh -- The recitation of sacred Buddhist texts in India's Ladakh region has been added to a UN list of "intangible cultural heritage" by the world body's committee tasked with protecting the oral traditions, performing arts and social practices around the world. 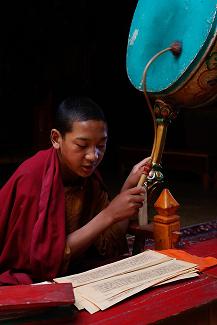 These include the traditional weaving of the Ecuadorian toquilla straw hat, the cherry festival in Sefrou, Morocco and the craftsmanship and performance art of the long-necked lute known as the Tar.

Referring to the Buddhist chanting, the committee said Buddhist priests in monasteries and villages of the Ladakh region chant sacred texts representing the spirit, philosophy and teachings of the Buddha.

The monks wear ritual clothing and use hand gestures and various musical instruments while praying for the spiritual and moral well-being of the people, for purification and peace of mind, to appease the wrath of evil spirits or to invoke the blessing of various Buddhas, Bodhisattvas, deities and rinpoches, it said.

Cultural items must comply with a series of criteria, including contributing to spreading the knowledge of intangible cultural heritage and promoting awareness of its importance to be inscribed by the committee.

Intangible cultural heritage encompasses practices and living expressions handed down from one generation to the next.

Only those countries that have ratified the Convention for the Safeguarding of Intangible Cultural Heritage can present elements for inscription on the lists.

So far, 146 countries have ratified the convention, which was adopted by UNESCO’s General Conference in 2003.