Los Angeles, CA (USA) -- Showing replicas of artworks instead of the real thing is usually anathema to an art museum, but the J. Paul Getty Trust on Tuesday showed why that rule has its exceptions. 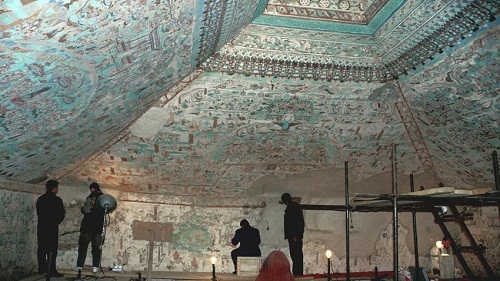 The Mogao Grottoes, a vast network of 492 caves in China, are covered with Buddhist murals. Exact replicas of three of the painted caves will come to the Getty Center in a 2016 show that also will include artifacts from the caves. (Neville Agnew / J. Paul Getty Trust)

The Getty Trust fleshed out details of its 2016 exhibition “Cave Temples of Dunhuang: Buddhist Art on China’s Silk Road,” which will include complete, exact, walk-in replicas of three decorated caves that artists adorned with Buddhist-themed murals over 1,000 years starting in the 4th century.

The caves are among 492 known as the Mogao Grottoes, dug into a mile-long cliff face about 1,200 miles west of Beijing. If all the paintings inside them were stretched out into a 10-foot-high mural, it would be more than nine miles long.

The actual Mogao caves draw about 1 million visitors a year, most of them from China. The fully-enclosed replicas, to be set up on the plaza at the Getty Center in Brentwood, will give a taste of the real thing to L.A. residents and visitors who can’t make that pilgrimage.

Neville Agnew, who has headed the Getty’s long-running effort to help Chinese authorities preserve and manage the caves, said that the replicas are exact in all dimensions, painted with the same pigments and using the same clay from a nearby riverbed that the ancient artists used in the caves.

“People will get essentially the same experience they would have at the caves themselves,” he said -- including craning their necks to see painted panels at the apex of the roofs, which are up to about 16 feet high. The re-creations will include replicas of clay sculptures, arrayed as they are seen in the actual caves.

The Dunhuang Academy and Dunhuang Foundation, which are responsible for the caves, have created replicas over the years, Agnew said. They're crafted to show the murals as they look today, "showing all the scars and all the wear and tear." The replicas tour extensively in China and have been seen elsewhere in Asia but have never been seen before in the United States, he said. Two of the three cave replicas coming to the Getty are new, created for the exhibition.

Entering the two larger re-creations will be like going into a two-car garage with a very high roof, with all surfaces sloped to match the actual caves’ dimensions, Agnew said. The smaller one is more the size of “a regular suburban bedroom,” but higher.

The show, running May 7 to Sept. 4, 2016, will have no lack of authentic -- and more transportable -- masterpieces. After experiencing the cave replicas, visitors can head inside for the rest of the exhibition in the galleries of the Getty Research Institute, built around other objects from the caves that were exported to Europe and landed in museums and libraries in Great Britain and France. The pieces, including manuscripts, drawings and paintings on silk, have rarely, if ever, been shown in the United States, according to the Getty.

The star attraction figures to be the Diamond Sutra, a Buddhist religious scroll with drawings that’s more than 15 feet long. Dating from 868, the work from the British Library’s collection is said to be the world’s oldest complete printed book. Rare books and maps from the Getty Research Institute's collection will augment the display.

The Getty Conservation Institute is organizing the show along with the Research Institute and the Dunhuang Academy and its foundation. Conservation teams from the Getty have been heavily involved since 1989 in trying to find the best methods to preserve and restore the Mogao paintings, and to develop ways to manage the site that will offset some of the ill-effects of mass visitation, such as humidity generated by human breath.