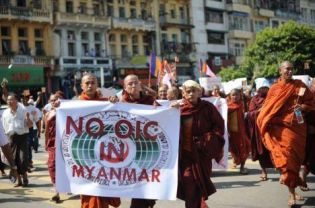 The monks, a potent political force in the predominantly Buddhist country, denounced plans by the 57-member Organisation of Islamic Cooperation (OIC) to set up a liaison office in northwest Rakhine state, where violence erupted in June between ethnic Buddhist Rakhines and Rohingyas.

Just hours after the monks dispersed, President Thein Sein's office announced it would not permit an OIC representation in Myanmar. It was not immediately clear if the announcement was linked to the protests or had been planned in advance.

"The government will not allow the opening of an OIC office as it is not in accordance with the desire of people," said a statement posted on its website.

The monks were joined by ordinary citizens in Yangon and Mandalay. Some carried placards with the words "get out OIC", and "no OIC" and said they would hold demonstrations until the government agreed to their demands.

Despite being one of Asia's most ethnically diverse countries, there is entrenched ill-feeling in Myanmar towards the estimated 800,000 Rohingyas, most of whom live in abject conditions.

Accused of being illegal immigrants and usually referred to as Bengalis because of their South Asian origin, the Rohingyas are not recognised as citizens by Myanmar.

"The OIC is only for Bengalis, not for us," said monk Pyin Nyar Nanda at one of the rallies.

Anger and fear still smoulder between Rohingyas and ethnic Rakhine Buddhists after the spree of arson and machete attacks that killed at least 77 people and displaced tens of thousands.

A delegation from the OIC visited Rakhine state last month after several Muslim countries voiced concern about the welfare of the Rohingyas, whom the United Nations has described as "virtually friendless".

In a report in August, the New York-based Human Rights Watch said it had found evidence of "state-sponsored persecution and discrimination" against the Rohingyas in the weeks after the violence, claims that the government strongly rejected.

While all sides of the political spectrum have called for calm, the issue has become a hot political issue for Nobel laureate and lawmaker Aung San Suu Kyi. She has faced international criticism for failing to speak out in defence of the Rohingyas, who are denied the same rights as Burmese.

During the trouble, many Rohingyas tried to flee in rickety boats to neighbouring Bangladesh, which also refuses to recognise them. Most were turned back by security forces.

The government had earlier indicated it would consider allowing the OIC to open a temporary office in the Rakhine capital, Sittwe, where aid groups and journalists say the two communities remain deeply divided.