Every July at the start of Buddhist Lent for as long as anyone can remember, giant catfish have made the journey up a tributary of Myanmar's mighty Irrawaddy river to an historic temple.

YANGON, Myanmar -- Devotees at the temple call them "pilgrim fish," and believe the creatures come to show their respect for the Buddha at a time meant to inspire religious contemplation. 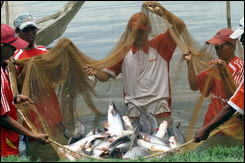 Their feeding area around the Kyaung Taw Yar Pagoda in central Myanmar is considered holy ground, and the fish are believed to have been coming since Buddha was alive some 2,500 years ago.

In more recent memory, postcards and photos from 20 years ago show children at the pagoda playing with -- and even sitting on -- the fish, which can grow to 150 centimetres (60 inches) long.

But only two pilgrim fish were seen at the temple last year and as Buddhist Lent approaches on July 29, many people are starting to worry that this year the fish may not show up at all.

"The Mone Creek was full of fish about 20 years ago," said Kyi Soe, one of the pagoda's trustees, as he held up an old photograph of himself with his arms wrapped around one of the massive fish.

This particular species of giant catfish, which is found in parts of South and Central Asia, is called rita rita. It reproduces slowly, and its habitat has come under pressure from increased fishing and the building of a series of new dams on the Irrawaddy and its tributaries, experts say.

At the request of the pagoda's trustees, Myanmar fisheries officials last year conducted a study of the Mone Creek but found little evidence of pollution that could be harming the catfish.

Dams are the more likely culprit, according to one of the experts who conducted the study.

Speaking on condition of anonymity, as most officials in this military-ruled nation do, she said that not only do the dams block the path of the fish, but they cause changes in the water flow that in turn alters sandbanks on the riverbed.

As a result, she said, some of the sandbanks may have grown so large that the giant fish are no longer able to get around them.

"That could be one possible factor that has caused the rita rita to disappear in that area," she said.

Official data show that since 1988 Myanmar has built 29 dams in Magway division, the central region where the pagoda is located.

The dams have helped farmers with irrigation and water control, but have also caused changes to the pattern of soil erosion and created more sand banks farther downstream than where they used to be found, the expert added.

Improved fishing techniques may also be taking a toll on the giant catfish.

"The modern fishing industry is commercialised for overseas export and furnished with advanced fishing equipment," said Myo Myint Tun, a depot owner who has fishing rights to a two-and-a-half-mile (four-kilometre) stretch of the Irrawaddy.

"Now we use three-layered nets that can catch fish of any size, big or small. People also use electronic devices and poison for mass fishing," he said.

The trustees tasked with caring for the pagoda say they just want the government to find a way to preserve the pilgrim fish.

"We don't want to see the pilgrim fish become extinct. Conservation of the fish is urgently needed," said Kyi Soe.