Kuala Lumpur, Malaysia -- Buddhist monks have been at the forefront of the recent anti-government protests in Myanmar, leading a groundswell comparable to demonstrations last seen nearly 20 years ago. 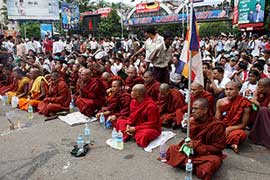 But the "saffron brigade" has been made up mostly of novice monks leading to questions over the absence of their seniors, the abbots, from the forefront of the marches.

At least one religious leader was reportedly in the midst of the protests on Thursday. The Roman Catholic archbishop of Yangon, Charles Bo, was reportedly tear-gassed near the Sule Pagoda.

But some commentators believe the presence of the abbots, or Sayadaw, on the streets could provide the tipping point for the overthrow of the military government.

Goh Seng Chai, Malaysia's representative to the Bangkok-based World Fellowship of Buddhists (WFB), said it was unclear as to why the abbots had not spoken up or led the marches in Myanmar.

"We have been discussing this with monks here [in Malaysia] and we are curious as to why they are not making a statement or taking a stand," he told Al Jazeera.

"Personally I think the abbots may not want to say anything that could hurt anyone's feelings because Buddhism teaches peace and compassion."

In just a few days, as the monks took up the vanguard of protests, their silent marches turned into chanting and eventually to three key political demands: that the government lower commodity prices, free political prisoners and open dialogue with the opposition.

Kirinde Dhammaratana, the Chief Sanghanayaka or high priest of Malaysia, said the senior monks may be staying in their monasteries because of "their bitter experiences" of military repression in the past.

"Maybe they are not in a position to come out and protest, especially when they don't know what the government will do," he told Al Jazeera. "As for the younger monks, they are more daring."

Zawana, a Myanmar monk who has been in Malaysia for two years, said senior monks cannot join the protests because they are kept under tight surveillance.

"It is impossible for the senior monks to join demonstrations," Zawana said.

"Even the young monks don't want to demonstrate but they are doing this on behalf of the people... they don't want the people to continue suffering under this military government."

The military government meanwhile has been quick to seize on the fact that many of the country's 600,000 monks have not joined in the protests, with state media painting a picture of disunity among the monkhood.

But the abbots appear to be treading a fine line between detachment from temporal affairs and compassion for people - both core tenets of Buddhist teachings.

Khin Ohmar, the co-ordinator of the Asia Pacific People's Partnership on Burma based in Thailand, said it was not part of Buddhist culture for senior monks or abbots to join protest movements because of their standing in the community.

Nonetheless she said the abbots had shown their firm support of the protests by allowing monks to boycott alms from those connected to the military government and organise peace walks, actions that would not have been possible otherwise.

"The alms boycott and peace marches could not have proceeded without permission from the abbots and senior monks," she told Al Jazeera.

"The perception that they are not united has to do with Buddhist teachings and practices," she said.

"Some monks tell people to be patient all the time to the extent of being passive, but there are those who interpret the teachings to reject all forms of injustices."

The move by the protesting monks to overturn alms bowls – a gesture seen as a symbol of protest – was taken as a last resort and after careful deliberation following an attack on a group of monks in the town of Pakokku earlier this month.

A threat on the monks' lives is one of eight prescribed circumstances in which Buddhism allows an alms boycott, and it must be declared through a formal procedure.

Khin Ohmar said a clear sign of support from the top of the Buddhist order came when less than half of the 47 members in the national Sangha attended a meeting with Myanmar's generals.

The meeting had apparently been called by the military government to persuade senior monks and abbots to issue an order for all monks to stop protesting.

They failed to do so, she said, "because such an order can only be issued if there is a unanimous decision."