Bangkok, Thailand -- Whether it’s the international New Year, the Chinese lunar New Year or the Thai solar New Year, the transition from one year to another offers an opportunity for Buddhists in Thailand to make merit by visiting sacred places. 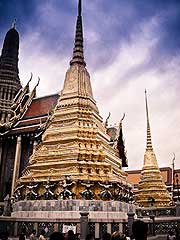 In fact, it’s not unusual for some individuals to take advantage of all three occasions to pay visits to the hallowed grounds of auspicious temples and stupas throughout the kingdom.
wat phra keaw

Such New-Year pilgrimages, whether they involve a single site or multiple sites, entail the presentation of offerings to pay homage to the Lord Buddha, dhamma and sangha — Buddhism’s master, teachings and community. Visitors may arrive early in the morning to offer food to resident monks, or they may arrive any time of day and offer other alms, including candles, flowers and incense at altars located in the wihan (main Buddha sanctuary) or at the base of a revered stupa. Cash donations to the temple may also be a part of the ceremonial offerings. Some templegoers will perform volunteer work in order to make merit at New Year.

The New Year is seen as a time to establish a new chapter in one’s karmic ledger, so to speak, and hence it is an especially auspicious time to make merit. The accumulation of merit — bun in Thai, from the Pali term puñña — is believed to exert a powerful influence on one’s future life and, indeed, future rebirths, when properly dedicated.

Earned merit can also be transferred to loved ones or other individuals we care about, including those who may have passed on. Such a sharing of merit, which reflects the Thai spirit of generosity and family loyalty, can be officially requested when donating to monks and monasteries, or privately declared when one performs merit-making acts.
Bangkok’s Sacred Nine temples

Nine of the capital’s more than 400 temples are considered particularly sacred Buddhist sites. Many Thais will visit all nine during a round of merit-making at New Year. This is partly because the number nine itself is an auspicious number, owing to the fact that it represents three times three, and three refers to Buddhism’s Triple Gems (Buddha, dhamma, sangha), making it a triply auspicious number. Furthermore, the Thai word for nine – kao – sounds similar to the word for advance, or step forward, (kaao), and hence it is thought that the number represents progress, both spiritual and material.

All nine temples are historic sites bestowed with royal rank, and led by abbots from the highest ranking clergy in the sangha — the Buddhist community. All contain at least one Buddha image reputed to be of great power. For these reasons donations and meditation undertaken at any or all nine is considered to be particularly meritorious.

Wat Phra Kaeo is well known to Thais and foreign visitors alike as the Temple of the Emerald Buddha, and houses the most highly revered Buddha image in the kingdom. Sculpted from green jasper (not emerald) in exquisite Lanna style, the 66-cm tall image is believed to have talismanic powers that protect the kingdom’s sovereignty.

Wat Pho, one of the oldest temples in Bangkok, covers an area of 80,000 square metres and houses more than a thousand Buddha images, including the highly venerated, 46-metre Reclining Buddha, one of the largest Buddha images in Asia.
Pilgrimages to Sacred Stupas

Outside Bangkok, a more widespread pilgrimage route links a dozen stupas (phra that in Thai), each associated with a different animal in the sip-song rasee, the 12-year astrological cycle shared by most Tai and Chinese cultures. Many Thais believe it is important that they visit the temple associated with their birth sign at least once in their lives, or better yet, on the anniversary of each 12-year cycle (at age 12, 24, 36, 48, 60, 72, 84, 96 and so on).

Stupas represent both a commemoration of the Lord Buddha’s life and the encapsulation of his teachings. According to the Thupavamsa (Stupa Chronicle), King Ajatasattu of Magadha and a Brahmin priest named Drona took custody of the Buddha’s remains after his cremation circa 543 BC. The relics, according to legend, were divided into eight equal portions to be enshrined in stupas in eight different locations in what are today northern India and southern Nepal. The verifiable history of the Buddhist stupa commenced during the reign of King Ashoka (circa 269-232 BC), the greatest monarch of northern India’s Maurya dynasty and the first Buddhist king in recorded history.

Legend says that Ashoka had the eight original reliquaries unsealed so that he could subdivide the contents and inter the relics in 84,000 stupas (to honour the 84,000 discrete constituents of dharma (dhamma) throughout South and Southeast Asia. Although this number may be apocryphal, Thailand’s 12 most sacred stupas ultimately owe their inspiration to King Ashoka’s historic stupa-building era.