Binh Phuoc, Vietnam -- 13 Years ago, late venerable Ly Sang came to Phum Thom and established the Wat Phum Thom temple, resided there as the abbot and later went on to try to create the first Khmer language classroom in the province. 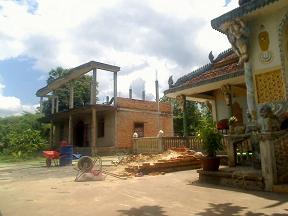 << The temple that the children learn Khmer and Pali language

This was in Binh Phuoc province, South Vietnam. Although Lok Ta (Khmer word for revered monk) Ly Sang passed away without seeing the fruit of his labor, his legacy and great devotion to the preservation of Khmer language lived on.
Today, thanks to his work, Wat (temple) Phum Thom host a thriving number of students attending its Khmer language class each evening.

Sometimes the small temple class would be completely packed, with all the rows occupied and every spaces and chairs crunched in so closely together that one could not escape a vivid conjuring of a huge centipede moving with its long stretch body of rows and all the students as its great many limbs.

This though, all happens in a temple classroom that is neither barely started nor barely complete. The classroom temple, separate from the main worship temple was put under halt by the government in Vietnam midway through its construction due to cited reasons that the indigenous architects who the abbot employed to construct the building had no insurances and therefore could not guarantees for the safety of the occupants.

In 2007, Lok Ta Ly Sang passed away. He did not get to see how successful his devotion had become, if he could see how many students are now in this class room, he would be so happy.

Although the classroom is being used, it is still far from a complete structure, and even though since then, the government has allowed for the restart of this construction, there is not enough money for the village to complete this building project. But the classroom is a two story building so even if there isn't a roof or that second floor is just a skeletal frame that doesn’t deter these students from coming to study.

With positive outlook they can say at least the second floor base can cover as the roof. And for now, that is enough. For these young and curious students of Khmer language, a place to shelter in study and a wonderful guru monk successor, it's a lot more then they had hoped for considering that only a few years ago no Khmer language classroom exist in this province.
They should be really proud of themselves because they are the first successful group to have a Khmer language classroom in the province, even if it's not complete.
This is the legacy of Lok Ta Ly Sang. Wat Phum Thom temple now boasts pupils of over a hundred young children.

On any given night the palpable sense of excitement and the thrill of learning the mysterious but yet native Khmer language and script is so great that you can feel the echoes of students chanting vowels and consonants far away and even when classes are no longer in session, you’ll still be able to hear the sounds of students learning their native language ringing in your ear so beautifully.

So beautiful, it’s almost haunting actually because if you knew that only a few years ago this place was silent then you be surprised and touched too. This feeling of surprise, pride, and communal accomplishment, that everything now falls in place the way it should be only increase in magnitude as you view it from an older person’s perspective.

Since the destruction of the old temple in the 70s by war plane, the villages have never had a monk again until Lok Ta Ly Sang came in 1996; in between that time, almost 30 years had gone by.