SEMENYIH, Selangor (Malaysia) -- Some strange images were seen in the sky during the cremation of the late Venerable Dr Rev K. Sri Dhammananda, the Chief High Priest of Malaysia and Singapore. 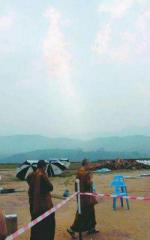 << An image like a meditating high priest awaiting ascension was seen in the sky.

At 9 am on Monday (September 4th), odd images appeared in the sky while two priests from India were chanting prayers for the late Rev Dhammananda in front of the cremation pyre. A ray of light suddenly appeared in the clear sky, projecting the image of a meditating high priest. Another image resembling the bodhisattva Guanyin could also be seen above the first image, as if it were welcoming the high priest image.

The odd sighting lasted for a mere five minutes, disappearing immediately after the priests finished chanting their prayers.

Rev Dhammananda's disciple Ananda said that his master did not encourage believers to indulge in superstitious speculation over such sightings. 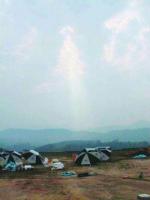 When the priests were meditating, another image resembling the bodhisattva Guanyin could also be seen in the sky.  >>

Ananda said his master told believers that such images were quite commonplace. It was just that no one had noticed them.

"Buddhism does not believe in such things. We think they may be natural phenomena or possibly caused by the imagination of the believers."

The staff at the Nirvana Memorial Park said that they had witnessed other strange sights the night before (September 3rd). There had been a loud thunderclap during the cremation and after that people had seen two dragons and a pagoda in the sky, as if to welcome Rev Dhammananda. 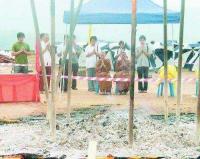 << Two Indian priests made a special trip to the Nirvana Memorial Park to chant prayers for Dhammananda.

Not long after, there had been another thunderclap, and people saw another dragon in the sky.

Because cremation on a pyre is a time consuming process, the cremation only finished at noon the next day. Believers had to wait until the ashes had cooled before they could search the ashes for sarira stones.

Because they were worried that thieves would steal away the master's ashes, the believers kept watch over the pyre through the night.