Singapore -- A 65-year-old temple off Bartley Road and its large bodhi tree - which are being acquired by the Government - are attracting hordes of visitors every weekend amid growing calls for both to be preserved. 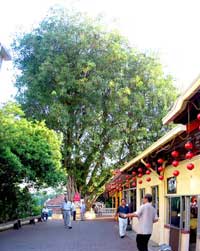 Ever since the Buddhist temple made the news in April for its bodhi tree - estimated to be more than 100 years old - more than 6,000 people have trooped down to Jin Long Si Temple in Lorong How Sun to check it out.

Some have set up blogs and started an online petition to save the wooden-walled, zinc-roofed temple, which an expert has said cannot be demolished without affecting the tree as its foundations are intertwined with the roots.

The temple management told The Straits Times it has collected 5,000 signatures since April for its petition against the land acquisition.

The bodhi tree is considered sacred as Buddha is believed to have gained enlightenment while sitting under one. The tree at Jin Long Si has a girth of 8.5m and is 30.5m tall.

According to Dr Shawn Lum, vice-president of the Nature Society (Singapore), it is 'in the same class' as the bodhi tree in Pearl's Hill City Park, which has been preserved as a Heritage Tree by the National Parks Board (NParks).

NParks said it is still considering whether the temple tree can also be a Heritage Tree.

Mr Richard Or, 45, hopes it will be preserved. The businessman, who visited the temple for the first time last Sunday, said: 'It's very majestic and a major landmark for the area.'

According to one of the temple's trustees, Mr Tan Poh Heong, 74, the temple receives busloads of local visitors as well as tourists from countries like Japan, Thailand and China every weekend.

The online petition started by visitors to the temple mentions how the Land Transport Authority spent $200,000 last year and changed the alignment of a stretch of Braddell Road to protect an 80-year-old angsana tree. It appeals to the authorities to show the same attitude to the bodhi tree at Jin Long Si.

The Urban Redevelopment Authority said the temple grounds, on a hill behind the upcoming Circle Line Bartley station, are being acquired to be joined with state land next to them so more homes can be built there.

'Given Singapore's limited land area, there is a need for a continuous effort to optimise the use of our land, especially at sites served by major public transport infrastructure such as the Circle Line and other MRT stations,' it said. It also said it is working with NParks to assess whether the tree should be preserved.

The temple has been offered an alternative site in Punggol, but its management still hopes it will be allowed to stay.

Asked what he will do if the appeal is rejected, Mr Tan, who has helped at the temple for 20 years, looked stunned. Tears welled up in his eyes. 'I will be the first to cry,' he said in Mandarin.

Help save Jin Long Si Temple and the biggest and oldest Bodhi Tree in Singapore
http://www.petitiononline.com/bodhi3/petition.html