Is Buddha tooth in Singapore the real McCoy?

Singapore -- WHEN it comes to housing a relic as sacred as a Buddha tooth, devotees spare no expense - as was the case for the new Buddha Tooth Relic Temple in Chinatown. 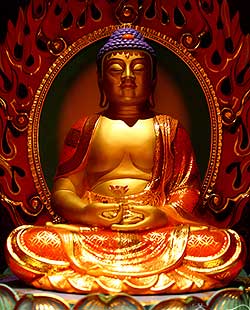 More than 60,000 donors poured $45 million and 270kg of gold into the four-storey building, where a tooth believed to be one of Buddha's molars now resides in a 3.6m-high stupa made out of worshippers' gold donations.

But now, doubts have been cast over whether this tooth belonged to Buddha - or even a human being. And they range from the historical and political to the anatomical.

Mr Yap Kok Feng, a paralegal executive, wrote to Lianhe Zaobao recently claiming that the relic looks nothing like a human tooth.

When contacted, he said that he had shown a picture of it to dentists who believe it to be a herbivore's.

One of them, Dr Pamela Craig, a senior lecturer at the School of Dental Science at the University of Melbourne, told The Sunday Times she had examined photographs and compared the tooth with teeth from various animal skulls in her comparative dental anatomy department.

'There's absolutely no possibility that it is a human tooth,' said Dr Craig, who specialises in human and animal oral anatomy.

'I'm almost certain that it belongs to a member of the Bos species, probably a cow or a water buffalo.'

Dr Craig said human teeth should be rounded with a short crown and a comparatively longer root, but the picture clearly shows a long crown and a shorter root.

'In this case, looking at a photo is clear enough because it's so obvious that it's not a human tooth. It's like comparing a pear and an apple.'

The Sunday Times also showed a picture of the tooth to four other dentists, including two forensic dental experts. All said the tooth could not have come from a human.

'This is an animal 'cheek tooth', that is, a molar at the back of the mouth,' said Professor David K. Whittaker, a forensic dental specialist at Cardiff University in Britain.

The seemingly uneven biting surface is indicative of grass-eating animals whose teeth have 'a very efficient grinding surface for breaking up coarse plant materials,' he said.

Dr Myra Elliott, a consultant oral and maxillofacial surgeon with a practice at Mount Elizabeth Medical Centre, said: 'Even if human teeth have been fossilised, there's still a pattern. And what is shown in the picture doesn't look like a primate's tooth at all.'

The size of the tooth - measuring 7.5cm - is also far too long for a human tooth, said Dr Anthony Goh, an oral and maxillofacial surgeon.

'There isn't enough space in the jaw.'

The tooth relic was supposed to have been discovered by a Myanmar monk, the late Venerable Cakkapala of Bandula Monastery, in 1980 while restoring a collapsed stupa at Bagan Hill in Mrauk-U, Myanmar.

He gave the relic to Venerable Shi Fazhao, the abbot of both the Buddha Tooth Relic Temple and Golden Pagoda Buddhist Temple in Tampines in 2002.

The public can see the tooth only twice a year - on Vesak Day and the first day of Chinese New Year.

When The Sunday Times asked Venerable Shi Fazhao about the tooth, he said in Mandarin: 'To me, it has always been real and I have never questioned its authenticity.'

As for the dental experts' assessment, he said: 'They can say all they want, I don't care what they say. If you believe it's real, then it's real.'

The curious dental structure is not the only bone of contention here.

In another Lianhe Zaobao commentary published on July 6, Chinese Buddhism studies researcher and lecturer Wan Bingyan cited religious and historical texts supporting the popular belief that only two of Buddha's teeth are left in this world.

They are now believed to be at the Temple of the Sacred Tooth Relic in Kandy, Sri Lanka, and the Ling Guang Monastery in Beijing, China.

When a third surfaced in 1998 after a Tibetan monk smuggled it out and handed it to Taiwan's Venerable Master Hsing Yun of Fo Guang Shan Temple, it was fingered by Chinese officials as a fake.

Buddha's relics are venerated by Buddhists worldwide and held up as national treasures in Sri Lanka and China.

China had allowed its Buddha tooth relic to go on tour to Thailand, Hong Kong and thrice to Myanmar at the government's invitation.

Two tooth relic pagodas were later built in Yangon and Mandalay, one housing an ivory replica tooth and the other, donated religious items.

Mr Kyaw Swe Tint, counsellor at the Myanmar Embassy here, said that as far as he knows, there has been no evidence of genuine tooth relics in his country.

'This (the one believed to be housed here) could very well be a fake,' he said.

But Venerable Shi Fazhao said Venerable Cakkapala had given him the tooth; it was a private matter between two people and not between two countries. 'Don't politicise it,' he said.

Would he let an expert examine the tooth in Singapore? He replied: 'It's mine, why should I let you examine it? Why don't you go examine what's in Sri Lanka and China first?'

Venerable B. Dhammaratana, religious adviser of the Buddhist Research Society, explains that different Buddhist societies would subscribe to different versions of Buddha's legends.

'You can't say which is right or which is wrong.'