Dhaka, Bangladesh -- Today is the Holy Buddha Purnima, the most sacred and most significant day for Buddhists all over the world. On this happy day the Buddha was born at the Lumbini Garden in 624 BC, attained Enlightenment under the Bo-tree at Gaya in 589 BC, and passed into Mahaparnibbana at Kushinara in 544 BC. The thrice-sacred events of Buddha Purnima are of great significance to the people of the world. It is observed all as the most blessed day with peace, happiness, universal love and purity. 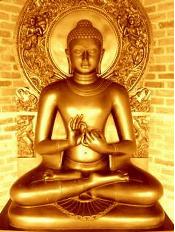 The Buddha, whose name was Siddhartha Goutama, lived in northern India in the 6th century B.C. His father, Suddhodhana, was the ruler of the kingdom of the Sakyas (in modern Nepal). His mother was queen Mahamaya. According to the custom of the time, he was married at the age of sixteen to a beautiful and devoted young princess named Yasodhara.

The young prince lived in his palace with every luxury at his command. But all of a sudden, confronted with the reality of life and the suffering of mankind, he decided to find the solution -- the way out of this universal suffering. At the age of 29, soon after the birth of his only child, Rahula, he left his kingdom and became an ascetic in search of the true solution of the suffering of mankind.

For six years the ascetic Goutama wandered about the valley of the Ganges, meeting famous religious teachers, studying and following their systems and methods, and submitting to rigorous ascetic practices. But that did not satisfy him. So he abandoned all traditional religious practices and their methods and went his own way. It was thus that one evening, seated under a Bo-tree on the bank of the river Neranjana at Gaya, at the age 35, Goutama attained Enlightenment, after which he became known as the Buddha "The Enlightened One."

After his Enlightenment, Goutama the Buddha delivered his first sermon to a group of five ascetics, his old colleagues, in the Deer Park at Isipatana near Benares. The sermon was: "Go ye O Bhikkhus, for the gain of the many, out of compassion for the world, for the good, for the gain, for the welfare of men. Proclaim O Bhikkhus the doctrine glorious, preach ye a life of holiness perfection and purification."

From that day, for 45 years, the Buddha taught all classes of men and women -- kings and peasants, brahmins and outcasts, bankers and beggars, holy men and robbers -- without making the slightest distinction between them. He recognised no differences of caste or social groupings, and the way he preached was open to all men and women who were ready to understand. At the age of 80, the Buddha passed away at Kushinara.

The Buddha was neither the son of God nor the God-sent Avatara and Super-Powered Debata but, being a son of Man, he rebelled against the teaching of Brahmanism. Thus, he compels nobody to believe in God or gods, nor does he prevent anybody from doing so. Buddha encouraged men to think independently, so it has never been the habit of the Buddhist to force, or desire to force, his convictions on those of other faiths.

Buddhist teachings were very practical and derived examples from life. They showed man's practical and moral life without the prevailing practice of rituals and ceremonies. The emphasis was on the character of men, all of whom were, according to him, capable of attaining Buddha-hood only by their individual moral practices. No one can pave the way for the other.

Accordingly, no priest or the like was necessary here, God had no room in his Dhamma -- the causal chain, the Conditioned Genesis and the Law of Dependent Origination. This is a fundamental principal of his teachings: "When this arises that comes into being: When this ceases that does not come, man is in a state of becoming and there is a continuity of individuality."

The Four Noble Truths are the kernel of the Buddha's teachings. He said: "Blind to the Fourfold Aryan Truths of things, and blind to see things as they really are."

Buddha's teachings condemn not only killing but also hatred and violence, which lead to the destruction of life -- human or any other living being. "A feeling of infinite tenderness for all living beings one must cultivate in the consciousness and in the heart the feeling with which a mother defends with her life her son. All living beings are my offspring and I am the child of all," Buddha said.

Buddhism promotes the practice of Five Precepts (Pancasila) -- not to kill, not to steal, not to indulge in unlawful sex, not to tell lies and not to take intoxicating substances. It also teaches the moral values taught by Buddha, which help to abstain from torture, adultery, trafficking, raping and robbing women and children, falsehood, slaughtering and violence, and peace, happiness and harmony etc. can be established in the moribund society.

Besides, in Buddha's universal theory Brahmavihara, the Four Components -- maitree (loving kindness), karuna (compassion), mudita (sympathetic joy) and upekkha (indifference) -- can drive away all the defilements, misunderstandings, fundamentalism and unwholesome activities from the society. If human society can adopt these virtues and qualities, then the world can be the kingdom of heaven for all beings.

Buddhism says: "There is a path to peace. Hatred never ceases by hatred; overcome hatred by love and compassion. This is the way of universal peace. Those who love me should show it by loving all. Conquer greed; thereby one becomes the unconquerable victor. Every man loves liberty and freedom. Don't interfere with another's freedom."

Therefore, at this crucial hour in the history of mankind, we consider it necessary to remind all people about the concepts of Panchashila (5 precepts) and Brahmavihara (4 divines tates or abodes of the gods), which are very essential at this moment.

They are needed so that we can progress towards this ideal and not regress, so that we go forward together as brothers and sisters for the sake of peace and wellbeing in the universe, without being selfish and taking sides against one another. Let us follow the Buddha's universal teachings for making a heavenly world. Sabbe Satta Sukhita Hontu (may all beings be happy).

-------------
The writer is a former Chairman, Department of Pali and Buddhist Studies, University of Dhaka and President, World Buddhist Federation-Bangladesh Chapter.