Equity and equality the Buddhist way

Colombo, Sri Lanka -- Sri Lanka signed the Paris Agreement in April, the culmination of negotiations held among member states who agreed on the landmark climate deal during COP21 held in Paris in December 2015. According to United Nations Framework on Climate Change, as  May 20, 2016, there are 177 signatories to the Paris Agreement. 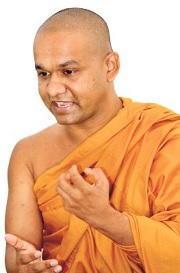 The Agreement intends to prevent increase in global temperature of more than 2 degrees Celsius, requiring countries to set their own national targets beginning in 2020. Another key objective of the agreement is for rich countries to help poorer nations by providing ‘climate finance’ to adapt to climate change and switch to renewable energy.

Despite so many years debating about poverty eradication through equality and equity and combating climate change through women empowerment, poverty is still very much a real pressing problem and women are still subjugated in some states.

What has all this got to do with Poson? For starters, living in harmony with nature, equity and equality that this Agreement and many others that preceded it, dabbles with, is nothing new to Buddhism. In fact, many of these high profile climate change framework planners may learn a thing or two had they referred to this over 2500 year-old philosophy called Buddha Dhamma.

“The Buddha has laid down enough codes of conduct to live in harmony with the environment,” said Mawarale Bhaddiya Thera. He advised his followers, “Vanang vindaka marukkan,” which translates to ‘Cut forest, but not trees’. “Here the Buddha refers to the forest of defilements,” explained Bhaddiya Thera. The Buddha encourages the nipping defilements at the bud, but discouraged cutting of trees. He advises his disciples against sustenance at the stake of the environment.

In environmental science, it is often argued that poverty forces people to violate nature for sustenance. But Bhaddiya Thera points out that, according to Buddha Dhamma it’s irreligiousness that force people to violate nature, pollute and abuse resources in their environment. “If the poor are not provided for, they will resort to irreligious activities, the side effects of which are crime and environmental degradation.”

The environment often suffers in the face of development, not often because of poverty, but because of greed for power, pointed out Bhaddiya Thera. This is exemplified in the Buddha’s words, “Uno loko atitto tanha daso,” which translates to ‘the world is insatiable, enslaved to craving’. “This is basic human nature reflected in the Buddha’s words, “Na kahapana vassena titti kamesu vijjati’, which translates to ‘Not by a shower of coins can sensual desires be satiated’. Adam Smith’s attempt was to solve the problem of limited resources with unlimited wants. However the best solution as provided by Buddha Dhamma is conquering one’s lust.”

According to Buddhist teachings Kaama should have discipline, as exemplified by the phrase ‘Kaame su vineyya’. “People  should be able to differentiate between wants and needs. Wants are often made to seem like needs through advertising,” warned Bhaddiya Thera. He reiterated that a simple reallocation of resources does not work to eradicate poverty. “It must be equitable; the poor must be helped out of their poverty by the rich. But that doesn’t mean that Buddhism makes allowances for the poor. Poverty doesn’t warrant irreligious activity.”

This is why the Buddha discouraged his adherents from engaging in the trade of arms, meat, alcohol and slaves. “It is because of pesticide, trade of poison,  people of North-Central and North-Western Provinces are suffering from CKDu.”

Gender equality is nothing new to Buddhism, with the concept dating back to 6th century BC. “The Buddha’s perception of gender is evident in the dual representation of Upasaka (male adherent) – Upasika (female adherent), Bhikkhu – Bhikkhuni. The Buddha took the pains to specifically highlight both sexes,” pointed out Bhaddiya Thera. In fact, note that the English word ‘adherent’ has no male-female division. It is ironic that for thousands of years over which the English language has evolved, the owners who flaunt phrases such as gender equality in the modern day, it has failed miserably to recognize the rights of women, when Pali and Sanskrit recognized it over 2,500 years ago.

“The Buddha has emphasized that wisdom has no gender,” said Bhaddiya Thera. When King Kosol was in conversation with the Buddha and a messenger delivered to him the news of a newborn daughter, the King became obviously distressed. Upon observing the sudden change in the King’s countenance, the Buddha advised that not all men are wise and, in fact, certain women maybe wiser than men. In fact being a woman is no hindrance to intellect and attaining Nibbana.

Buddha Dhamma clearly gives precedence to the mother. This is exemplified in the Buddha’s words, “Brahmati matha pitharo,” which translates to ‘Brahma are your mother and father’, as well as the lines “Matha pithu upatthanam’ (looking after the mother and father is considered a blessed act) in Maha Mangala Sutta. “Note that ‘mother’ always comes first,” pointed out Bhaddiya Thera. “In the former, the Buddha has infused qualities of the Brahma to motherhood.”

In Parabhava sutta (Verses on the Cause of Downfall), the Buddha says,

(He who exhibits negligence in caring for his mother, father and elders, this is the path of deterioration and decay.)

“This is how the Buddha encouraged gender equality not only in philosophy, but also in practice,” pointed out Bhaddiya Thera. “The Buddha kept putting off the establishment of a female order of Sangha because 6th century BC society was quite very different from the 2016 society. Instead he put it off until such time the society was refined enough to accept a Bhikkhuni Sangha.”

The Buddha gave women permission to enter the order subject to the observance of Ashta Garu Dharma (eight chief precepts). “This he did for the Bhikkhuni’s own protection,” said Bhaddiya Thera. The Buddha was probably the pioneer in women’s rights lobbying.
TOP