Strong Similarities between Buddhism and Islam

Colombo, Sri Lanka -- The Holy Quran, which was revealed to Prophet Muhammad (PBUH) more than 1400 years ago, makes allusion to the Buddha, and there are several similarities in Buddhism and Islam. 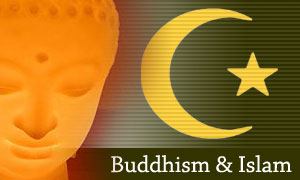 A prince of the Sakya clan who spent 13 years of his life in luxury, Siddharta Gautama relinquished his worldly life at the age of 29 years and meditated in the forest for six years in search of the truth for the cause of suffering and attained Enlightenment, or Buddhahood.

The Gautama Buddha preached the noble doctrine of Buddhism more than 2500 years ago, and during the course of his preaching he had declared to his chief disciple Ananda that he was neither the first Buddha nor the last, but that Maitriya Buddha would appear in the world after him to preach the same doctrine.

Prophet Muhammad (PBUH) preached the doctrine of Islam 1100 years after Buddhism had flourished, and his preaching bears close affinity to the noble doctrine of the Buddha. Let me dwell at length how Al-Quran makes indirect allusion to the Buddha in Surah XCV: 1, 2 & 3. (Tin or Fig) and footnote Al-Quran 6198.

"By the Fig and the Olive and Mount Sinai and the City of Security, we have indeed created man in the best of mould. Then we do abase him (to be) the lowest of low."

The Muslim theologians attribute meanings to the verses as follows: The Olive here bears reference to the Mount of Olives just outside the walls of the city of Jerusalem, thus symbolising Christianity; Mount Sinai was the mountain in which the law was given to Moses, symbolising Judaism. The City of Security refers to Mecca.

So Mount Of Olives refer to Christianity and Christ: Mount Sinai for Judaism and Moses; Mecca for Islam and Muhammad. But what about the Fig? It is the belief of the Islamic theologians that since the last three symbols refer to prophets and religions, the symbol Fig should also refer to a prophet and a religion.

Buddhism being the most populace living religion of the world during the advent of prophet Muhammad and the Bodhi tree being the one under which Siddharta Gautama received Enlightenment, Quranic commentators legitimately connect the Bodhi tree to the Fig tree, and hence infer that the symbol Fig refers to the Buddha and Buddhism.

Let me adduce another Quranic passage regarding the Buddha, whose story is stated at length in the 18th Chapter of the Holy Quran. Surah Kaaf XVIII:66-74;75-82 reflect that the Buddha enjoys an esteemed position in Islam that prophet Moses, who was given the law in Mount Sinai, was commanded to undertake a journey far off to learn from Al-Khadir as evidenced in the Holy Quran.

"And we called him from the right side of Mount Sinai, and made him draw near to Us for mystic (converse)." - (Surah Maryam XIX: 52 footnote 2504)

The Buddha's austere teaching and magnetic personality led Al-Shahristan, a renowned Muslim historian of religions of the 12th century, to conclude that the only person to be indentified as the Buddha in Islamic tradition is Al-Khadir, though, of course, some Islamic commentators had different opinions to the effect that the Buddha may be a prophet, an angel or saint.

During the 14th century, Rasheeduddin Fadhullah, in his book, portrayed the noble features of the Buddha and in one chapter reflected an account on the life and times of the Buddha. He is considered a prophet with a book called Abi-Dharma containing the quintessence of truth.

It is noteworthy to state here that some of the Islamic commentators of the Holy Quran have identified the Buddha with the prophet Dhul-Kifl, assuming that Kifl is the Arabic synonym of Kapilavastu. Unfortunately, most of the contemporary Muslims are not aware of his position and hence have formed a misconception about the Buddha.

A peep into historical and scientific fact is relevant to this discussion. Geologists believe that the Earth has been existing for about 200 crores of years (1 crore equals 10 million), which means the age of the Earth is 2000 million years.

Soviet archaeologists have discovered the fossil remains of a left calf bone of a pre-historic man dating back to 200 to 250 thousand years, in a large cave on the Chusanaya River, while Soviet scientists who examined the stone age tools found in the bank of Ulanka river in the district of Soviet Union, have concluded that the earliest man was an Asiano who lived in Asia 690,000 years ago (Source: Wisdom Journal Nos 1,9,14) Historical facts reveal that humans have been existing for about 600,000 to 1,000,000 years (Source: The Vedanta Kesari Journal-March 1951), though life has been existing for about 500 to 800 million years on the surface of the Earth which is 2000 million years old.

It is believed those humans were pre-historic, lived without religion and language, and so communicated in sign language. Over the years, man has developed resulting in the birth of language and civilisation, and this revolution in man's sphere of activities brought forth the propagation of so many religions.

Therefore, it is not fallacious to adumbrate that the advent of language and literacy saw the birth of many religions such as Hinduism, Judaism, Buddhism, Christianity and Islam, in different period of time. History reveals that the pre-historic men of 600,000 years ago had some form of worship to their imaginary super power, the supposed God that fulfilled their basic necessity-hunger.

So these ancient primitive people worshipped stone, fire, sun, moon, water, tree etc, whatever, they thought, that sustained their life's requirement. So a pantheon of gods - moon god, sun god, fire god etc, took root and began to flourish in the mind of prehistoric men.

Religion is one's personal conviction. There have been many religions in the world after the dawn of a civilized era, and Al-Quran makes provision for its adherents to respect and love the adherents of other religions in the world. This is what the Holy Quran says: And I will not worship that which ye have been want to worship, Nor will ye worship that which I worship. To you be your way, and to me mine.

The Holy Quran, which was revealed to prophet Muhammad (PBUH) more than 1400 years ago, makes allusion to the Buddha, and there are several similarities in Buddhism and Islam.

It is noteworthy to state here that Islam emphasises the importance of coexistence with other communities, and enjoins them for healthy communication and social integration, but does not impose a compulsion on religion as declared in Al-Quran:

If it had been thy Lord's will, they would all have believed - All who are on earth! Wilt thou then compel mankind, against their will to believe! (Surah Yunus X:99 footnote 1480)

Logically thinking Muslims, if their minds are not warped with parochial views, would see eye to eye with the writer that Buddhism and Islam have strong similarities, which need to be elucidated here to enlighten those Muslims who are in the dark. According to the Buddha, there are several minor Buddhas but only 25 Buddhas preached, and Al-Quran also names only 25 prophets who preached while tradition pinpoints to several prophets who did not preach a religion.

The essence of the Four Noble Truth and the Noble Eightfold Path of the Buddha's teaching are clearly enshrined in Islam; the four Noble Truth - suffering, the cause of suffering, the cessation of suffering and the path leading to the cessation of suffering, and the noble Eightfold Path namely Right Understanding, Right Thought, Right Speech, Right Action, Right Livelihood, Right Effort, Right Mindfulness and Right Concentration are similar to Islamic doctrine which enjoins man to be contented with what he has and lead a truthful and righteous life for peace and contentment.

The Buddha's philosophy of "Middle Path of Life" by avoiding the extremes of sensual pleasure and self mortification finds perfect harmony in Al-Quran which refers to the Muslims as the "Middle Nation" and lucidly explains that the adherents of this sect should not seek either extremes of life.

Buddha's assertion that one should not believe anything on the basis because a wise man said it, or because it is generally believed, or it is written, or it is said to be divine, or because someone else believes it, but believe it only oneself judges it to be true, finds similarity to prophet Mohamed's advocation to the effect "Seek thy judgement in thy heart irrespective of what others say."

Whilst exhorting his disciples to follow the essence of the Dhamma, the Buddha advocated against the making of idols for the purpose of veneration; similarly Islam too imposes a taboo on idol worship. The following verses condemn idol worship.

"Takest thou idols for gods? For I see thee and thy people in manifest error". (Surah An'am VI:74) Behold, he said to his father: "O my father! why worship that which heareth not and seeth not, and can profit thee nothing". (Surah Maryam XIX: 42) Behold! he said to his father and his people: "What are these images, to which ye are so (assiduously) devoted" (52) He said: "We found our fathers worshipping them". (53) He said: "Indeed ye have been in manifest error-ye and your fathers" (54) - (Surah Anbiyaa XXI: 52,53, 54).

Buddhism condemns caste and asserts the equality of all, and Islam too stresses the equality of individuals, abhorring caste. Finally the doctrine of no self or the concept of Nibbana in Buddhism finds a parallel theme in the "Sufi" concept of annihilation of both ethical and psychological aspect. Nibbana, which means non-existence, find similarity to the Islamic portrayal of heavenly life which according to tradition is endless bliss and cessation of suffering. (Al-Quran appendix VIII page 924). This is the characteristic in Nibbana.

The Islamic world should take cognizance of the fact that Islam considers religious freedom as a basic right for all humanity and Al-Quran strongly advocates a great degree of respect and sympathy, tolerance and dialogue, and appreciation and cooperation with the adherents of other religions.

In the light of this fact, the adherents of one religion should not erroneously think that their religion is superior to other religions, as the ultimate goal of religions is moral guidance for mankind; the misconstrued notion that Buddhism is idol worshipping should be totally obliterated from the minds of Muslims, in view of the high position the Buddha enjoys in Al-Quran.