Closely aligned with the temple in China, the shrine in Sherman Oaks focuses on philosophy and meditation.

Los Angeles, CA (USA) -- China's world-famous Shaolin Temple gained prominence among many Americans with the release of the 1980s martial arts movie of the same name. An updated version of the film, loved by fans for the riveting kung fu stunts of the temple's legendary fighting monks, is in the works. And in recent weeks, Hollywood's remake of "The Karate Kid" has topped the box office, wowing audiences with its seemingly magical martial arts techniques. 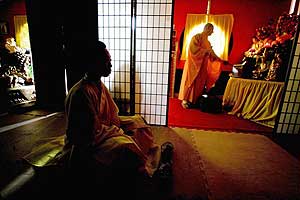 But while kung fu continues to make a splash on the big screen, members of the Shaolin Buddhist Temple in Sherman Oaks are keen to spread a different message about the Shaolin culture and what their sanctuary has to offer.

"When people come here, it's not just about martial arts," said the temple's master, Italian-born Franco Testini, 43, whose Buddhist name, Shifu Shi Yan Fan, was given to him by the abbot of the Shaolin Temple in China.

"Hollywood has completely exaggerated the martial arts scene," added Cindy Truong, 32, a temple volunteer and event coordinator. "It's not all about Chinese people being thrown over chairs. The martial arts you see in the movies, that's Americanized. It's a very small part of Shaolin culture."

Situated on a busy stretch of Ventura Boulevard, the temple opened in 2008 and offers a tranquil escape from the world outside. Instruction focuses on Buddhist philosophy and meditation, the art of ancient Chinese tea ceremonies, a combination of stretching and breathing exercises known as chi gong, tai chi — and, of course, martial arts.

"But we don't train people to punch and kick," said Truong. "We train people to become strong internally, and that emanates externally. We try to educate people, that it's more than just fighting and fancy moves."

Testini stressed the link between breathing, listening and learning as a key to developing harmony between the mind and body.

Although there are several Shaolin schools in Los Angeles, only the Sherman Oaks shrine is listed on the official website of China's Shaolin Temple, where it is described as "the first official branch organization in North America."

What makes the Sherman Oaks temple even more unusual is Testini, its master.

In 2007, Testini became the first Westerner to be accepted into the elite of the 1,500-year-old Shaolin Temple in eastern central China, his supporters said. In an ancient ritual, he received the Buddhist brand marks that symbolize his high status in Shaolin culture, they added.

Articles in Chinese news media and American martial arts magazines publicized the honor bestowed on Testini, whose journey to monkhood began when he was a youngster in his hometown of Brindisi, an Italian port city.

Testini was 7 when he started taking martial arts lessons, he said. At 9, he began to compete. By his teens, he had won numerous competitions. And at age 21, he entered the monastery and eventually took vows to become a monk. His study at home was complemented by numerous trips to China's Shaolin Temple, to solidify his discipline and faith.

In 1994, Testini arrived in the United States. He didn't speak English and he was homeless for the first several months, sleeping on the beach or in abandoned cars. He traded martial arts instruction for food and soon developed a following of students and friends, who eventually found him permanent shelter. And in 2008, his students helped him lease a former furniture store that became the Sherman Oaks temple.

For Testini, his good fortune wasn't the result of luck but of his unwavering conviction that "everything is within reach."

It's a message he preaches daily, over tea, to the more than 50 people who have become members of the temple.

"You have to learn to believe in yourself," said the monk, who still struggles to tackle some English words and grammar.

On a recent morning, about a dozen students gathered in the shrine's small hall, decorated with Chinese murals and ornate golden figurines, to practice chi gong. Testini drifted among the participants, gently adjusting their positions.

"He can feel your aura and energy, your intensity and anxiety level," said Truong, as she observed what has become a familiar ritual. "Just by looking at a person's facial expression, he can see what kind of stress they have inside."

Cantamessa, who said he is "pushing 70," is among the temple's longtime members, whose ages range from 2 to 80. Some are novices to the exercises and meditation; others have years of experience. Several work in the film industry and use the Sherman Oaks shrine to escape from the Hollywood hustle.

"I find the meditation very good," said Cantamessa, a retired production sound mixer. "I like the experience of concentrating … the peace of mind. I feel like a different person when I'm in here."

"You find a sense of inner calm," actor Adrian Paul, 50, said of his frequent attendance at the temple. "It allows you to enter another world, which centers you. Shaolin is what ballet is to dance. It's the foundation that gives you the ability to do what you want to do, better."

Rosie DiPrima said she got interested in the temple after observing her children, aged 7 and 10, participate in a martial arts class.

"After a week of watching, I started participating," said DiPrima, 37, a movie industry chef. "It's completely changed my life."