Kuala Lumpur, Malaysia -- FOLLOWERS of the teachings of Buddha encircle our blue planet.  Like the migration of birds, their activity (and non-activity) proceeds without any single, central leader.  What it is, is – up to its communities and practitioners ever seeking harmony with life. 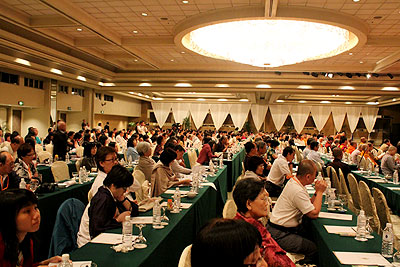 The Buddha once declared that whenever three or more people sincerely gathered in his name, he’d be there. A year after his final continuance (paranirvana), 500 of his realized disciples convened to discuss the preservation of their practice. Three of four more such summits were held, over the years.

Gathering together to learn from the past and renew our vows for the future, all in the present moment, can be wonderfully salutary. Such was the case on the weekend of September 25-6, when the 2010 World Buddhist Conference (WBC) convened in Kuala Lumpur.  This important gathering could be typified by its marriage of broad scope with relevance to everyday life. Here follows the first of a series of exclusive reports on this invigorating wind.

Coming Together Under One Banner

The World Buddhist Conference was initially organized to provide a contemporary approach to issues affecting Buddhism. It continues to illuminate the timeless Dharma through the lights and lives of male and female monastic and lay practitioners from all traditions –including such notables as Pra Ajahn Brahm, Geshe Thubten Jinpa, Roshi Jan Chozen Bays, and Bhante Gunaratana.

Please goto: www.wbc.my to view more pictures from the conference

When the 2010 conference was first conceived, the catastrophe of 9/11 and collapse of America’s debt chain were still of recent memory. The phrase, “when things fall apart” came to mind.* Indeed, people often turn to the Buddha’s teaching from personal disappointment, such as experience of divorce, disaster, or death. We may hold life to a model of perfection, but impermanence is a fact of nature.  An intricate spider web can blow away in a storm.  A life’s savings built up over years can be wiped out in a single day.  An entire family is placed in jeopardy when its breadwinner meets an accident on the road.  A bird with a broken wing fears being target of other birds. A war veteran, haunted by memories of killing in battles fought in a distant land, is unable to return to normal life.

Thinking it through, the organizers realized their initial phrase, alone – ‘things fall apart’ -- might seem like too bleak a prospect.  Further contemplation yielded ‘Living in Harmony.’  The two phrases fit in a perfect balance, as of Ying and Yang. Living in Harmony: When Things Fall Apart.  After all, the Buddha tells us he offers but one teaching: the nature of suffering, and liberation from suffering.

Instead of living on autopilot, driven by stress and anxiety, we can look into the roots of our suffering, to gain deep insight into its cause and remedy.  We can know ourselves better and more profoundly by cultivating and tapping the potential of the mind – training mind as a tool to transform mind.  We can mobilize our wealth of inner and outer resources for learning, growing, healing, and transformation, regardless of our situation – and participate in the common wealth of friends along the path.

The next step for the conference organizers was finding speakers for the year’s theme. Benny Liow, of Buddhist Youth Association, deserves a deep bow for assembling a well-rounded roster of high-caliber presenters, capable of connecting with a diverse, savvy audience.  No doubt, his ongoing tenure as editor of Eastern Horizon helps him keep his finger on the pulse of international Buddhism. As is the custom of the series, the final line-up not only represented the three major groups of traditions, Theravada, Mahayana, and Vajrayana, but also a healthy blend of gender, age, profession, etc.  Relative status ranged from one of the most beloved spiritual leaders of our time, Ven. Thich Nhat Hanh, to the relatively unknown but potent Anchalee Kurutach who has been involved in refugee work and survivors of torture for over twenty years in her native Thailand as well as in the US.

This Writer was particularly honored to meet two Malaysian presenters.  Venerable Wei Wu from Than Hsiang Temple, Penang, is best known for setting up Malaysia’s first International Buddhist College, and many welfare projects such as kindergartens and orphanages throughout the country.  Very present too was Buddhist psychotherapist Dr Tan Eng Kong is a key figure in the alloy of psychology (soul-study) and Buddhism (the art of awakening). 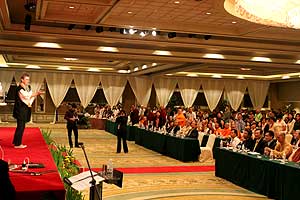 << Roshi Joan Halifax demonstrating a healing session at the WBC 2010

Other speakers included Venerable Tenzin Zopa from Nepal, a resident teacher at Losang Dragpa Center, Petaling Jaya — who we instantly recognized from the widely acclaimed, new documentary The Unmistaken Child, about his search for his reincarnated teacher Lama Konchog. Speakers from the West included Dr Joan Halifax, internationally-reknowned medical anthropologist and Zen master; Venerable Tejadhamma, a pioneer in hospice work in Sydney, Australia; Venerable Thubten Chodron, well-known author and spiritual teacher from the Pacific Northwest of America; and Prof David Loy, gifted scholar practitioner from the US and co-founder of Buddhist Global Relief.

On Saturday morning, September 25th, years of hard work paid off.  The palatial grand ballroom of the Hotel Istara was filled to capacity with 800 attendees, from across 12 countries. The audience mirrored the diverse presenters, in reflecting a balance of both women and men, young and old; a cross-section of seekers from everyday society.  All there welcomed the conference’s practicality, on how to live in harmony and lead peaceful, happy lives. As the Malaysian Buddhist community has a penchant for wearing white, in the sea of attendees there was fine contrast of white clothes, bordered by the grey and red, saffron and orange, of the robes of monastic attendees from various sanghas. The palatial crystalline chandeliers in the ballroom seemed, to this Writer, like bright nodes from the Net of Indra, infinitely interpenetrating luminosity and bliss, overhead.

Prof Loy spoke for hundreds there when he told us, after the event, ‘I found it very moving, not only because of what people said, but how they said it. Everyone spoke from the heart, and you could feel it.’

In the next installment of our exclusive coverage of the World Buddhist Conference 2010, we’ll spotlight the keynote appearance by Ven. Thich Nhat Hanh and his sangha.
Stay tuned.  Breathe.  Smile.

------------------
* Note: Originally from W B Yeats’ 1921 poem The Second Coming, Nigerian author Chinua Achebe made the phrase the title of his groundbreaking 1958 novel. In 2000 Pema Chodron used it as the title of what would become a different kind of internationally classic book.