David Loy is author of several books, including Nonduality; A Buddhist History of the West;  The Great Awakening; The Dharma of Dragons and Daemons,  Money, Sex, War, Karma, Wisdom ; and , most recently, The World Is Made of Stories. During the American war in Vietnam, Loy traveled to Hawaii and discovered Zen. He is an authorized teacher in the Sanbo Kyodan lineage of Zen, in which he completed formal koan training under Yamada Koun Roshi. 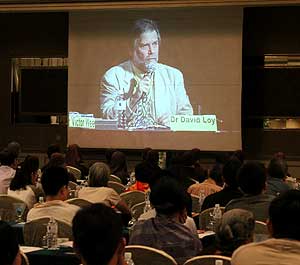 Prof Dr David Loy presenting his commentaries at the WBC  >>

Prof Loy teaches in the US but has also taught in Japan, and just down the hall from Malaysia in Singapore. His main field of research is in East-West philosophy, especially as to how Buddhist perspectives bear upon such contemporary social issues as violence, restorative justice, economics and globalization, biotechnology, environmental crises, and ‘the clash of civilizations.’

Prof Loy began his talk, as Ven. Thich Nhat Hanh did, invoking the  reality of nondualism.  He  read the following:

When I look inside and see that I am nothing,
that's wisdom.

When I look outside and see that I am everything,
that's love.

Between these two,
my life turns.

The saying comes from Sri Nisargadatta, of the Vedanta path.  Nonduality, central to Ven. Thich Nhat Hanh’s keynote, can thus be found in many wisdom traditions.  The Buddha’s emphasis uniquely centers upon the deep connection between our  dukkha (our suffering) and atman (our illusion of self).

Prof Loy recalled recently reading the following statement in an essay by Thich Nhat Hanh: ‘We are here to overcome the illusion of our separateness.’

‘Separate from what?,’ Prof Loy then asked. He answered his own question by quoting Zen sage Dogen: After awakening I came to realize clearly that mind is nothing other rivers and mountains and the great wide earth, the sun, the moon, and the stars.’   Awakening is thus not transcending this world, nor experiencing another kind of reality.  It's rather the letting go of our selves to realize the nondual nature of reality.

The fundamental illusion is that somehow I'm inside and all of you are out there.  This is the source of great suffering because this feeling of self which is not real and and therefore  alwaysinsecure. Since this sense of self is not real, we become preoccupied with trying to make something real which is not real.  We become preoccupied in trying to secure something that cannot be secured.  We think our problem is out there, if only we can solve  this problem  or get that thing.  But the Buddha tells us it doesn't work that way.  We have to realize the true nature of our own mind.

Prof Loy typified what he heard in Thich Nhat Hanh’s talk as capable of being called the deconstruction of the sense of self. ‘This is what we do in meditation,’ he said.  ‘We let go of our habitual ways.  We let go to realize the nondual: David Loy, and each of us, is a way in which the whole universe comes together in this moment.’

‘In addition to deconstruction,  Buddhism teaches reconstruction of the sense of self.  We see this in the way Buddha transformed the traditional notion of karma.  In his time, karma had been understood in a ritualized, formal way. If one performed a sacrificial ritual in the right way one would get what one wished.  But the Buddha said it depended instead on intention.’

An anonymous verse (not necessarily Buddhist) sums it up, thus:

Prof Loy commented , 'This gives us insight into how karma works, and it is also consistent with Buddhist teachings about non-self (annatta). Buddhism starts with what I think because that determines the intentions that motivate my actionsm, and actions repeated ecome habits. Habits create my character because my sense of self is actually composed of habitual ways of thinking, feeling, and acting. This sense of self determines how I relate to the world and thereby strongly affects how the world relates back to me.’

So through right view of our mind, we can transform our thoughts, which, as Ven. Thich Nhat Hanh points out, influence our words, which influence our actions, and thus all that follows.

In this light, Dr Loy welcomed the Five Mindfulness Trainings as a wonderful way of reinterpreting and understanding the Five Precepts. The Precepts, he said, are not rules follow — but , rather, they call us to fundamentally re-engage within ourselves, in our vows, through this fundamental training. Training our minds in this way will transform our selves … how we relate to the world … … … and how the world relates to us. 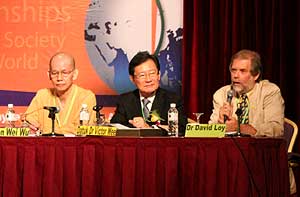 In his remarks, panel moderator  Datuk Prof Victor Wee recalled when Ven. K Si Dhammananda had undergone medical treatment. He was resting in a bed, in an open ward, wearing hospital-issued clothes.

A nun came, wanting to uplift everyone's spirits. When she went  to his bedside, he did not object to her invitation to join her in prayer to God. Soon, a group of his students and devotees came in and, going to his bedside, knelt in devotion. The nun asked someone who he was. Learning he was a revered Buddhist monk, she later went to him, ashamed, and apologized since he was obviously not a believer, Smiling, he reassured her there was nothing at all to forgive since he knew her intentions were good, and was  more than glad to share in and enjoy that goodness.

Venerable Wei Wu was born in Penang. After earning a degree from University of Canterbury, New Zealand, in Electrical Engineering degree  he worked for Procter and Gamble, Philips, Fiat, and Astec. Venerable Wei Wu was ordained as a Buddhist monk in the Mahayana tradition in 1992 and established the Than Hsiang Foundation in Malaysia and Thailand and the International Buddhist College (IBC) in Hatyai, Thailand. IBC is a non-sectarian Buddhist Institute, which takes the Pali Canon as foundation for Buddhist Studies 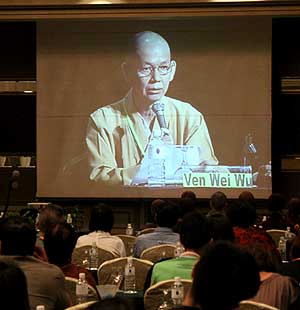 << Ven Wei Wu delivering his commentaries at the WBC

He is also Abbot of Tham Wah Wan Temple in Kuala Lumpur, where many IBC courses are being conducted for participants in the central region of the country. Venerable Wei Wu is also very active in social welfare projects, having established homes for the poor, as well as kindergartens throughout Malaysia.

[As of this writing, Ven Wei Wu has been spearheading relief work for victims of floods in Thailand and the tsunami and volcanic eruption in Indonesia.  For more info: http://tanxiang.org  . namo guan shi yin pu sa ]

When Ven. Thich Nhat Hanh had stated, ‘One Buddha is not enough, Ven. Wei Wu recalled in this connection a interesting meeting between two great religious personalities during our time, here in Kuala Lumpur - namely, His Holiness the Dalai Lama and Tengku Abdul Rahman, the first Prime Minister of Malaysia.

After his reitirement as Prime Minister, he was president of an Islamic Foundation - PERKIM (Pertubuhan Kebajian Islam Malaysia / Muslim Welfare Organization Malaysia). When His Holiness visited Malaysia many years ago, Tengku Abdul Rahman, in his capacity as the Perkim's president invited His Holiness for a reception.

During this meeting the Dalai Lama said, ‘Man is very intelligent. We have created enough weapons to destroy this world seven times over. [This being 30 years ago, that capacity has increased many more times now]. The only hope we have to stop this tragic prospect of man destroying the world with his weapons is to use the influence of religions.  There is however no one religion in the world that can do this alone. The only hope is for leaders of different religions to work together spread the common teachings of peace in their religions to their respective followers. If instead, we were to fight holy wars in the name of religions, we will make man's destruction of the world come earlier!’

Ven. Wu Wei then also recalled that, not long after that meeting, he joined friends in Malaysia going to attend the first meeting of the World Fellowship of Buddhists held outside of Asia, at Hsi Lai Temple,  Southern California. Present at that conference was a group of Chinese Christians with a banner reading, ‘Those who do not believe in God will go to hell.’ This was quite shocking to him, especially given this occurring in a free country such as America.

On the other hand, he also shared the story of a resident at the senior citizens' home run by Than Hsiang Temple. She happily told a visitor once, ‘I have two lords: Lord Jesus and Lord Buddha.’ This, Ven. Wu Wei declared, is what we need. A very devout Christian, she would say her daily prayer but she'd also join other residents for their morning services.  One of Venerable Wei Wu's nuns would lead in a chant of Amitabha, and she joined in every day.

Ven. Wei Wu noted that when Ven. Thich Nhat Hanh first coined the phrase ‘engaged Buddhism’ (literally“Buddhism which enters into the world”) it had its roots in the Humanistic Buddhism reform movement by Ven. Tai Xu.(1890–1947). Ven. Wei Wu agreed with Thich Nhat Hanh's Five Mindfulness Trainings as a contemporary expression of the Five Precepts, which he felt offered something very useful for global community.

He then noted that many esteemed speakers present at the Conference were very  well-versed in psychology; many of them had done very good work to use Buddhist teachings in psychotherapy.  He then commented on the application of psychology and Buddhism together.  When he have to heal the troubled mind, it is necessary to accept the 'self'. He commented that Buddhist psychology has to transcend therapy in dealing with the troubled mind; it has to bring forth the the very best in human beings, which includes anatta, 'no self’.

He concluded with the following story. A Muslim once visited a Buddhist temple. He said to the abbot, ‘When I use the rosary, I pray to God, “Allah, please give me power, power, power.” How do you use the rosary?’

After a public lecture delivered in Penang, that week, Ven. Thich Nhat Hanh presented Ven. Wu Wei with a copy of his book Touching Peace : Practicing the Art of Mindful Living. Letting Thich Nhat Hanh have the final word, he quoted from the last chapter, Realizing Ultimate Reality:

We come to the practice of meditation seeking relief from our suffering, and meditation can teach us how to transform our suffering and obtain basic relief. But the deepest kind of relief is the realization of nirvana. There are two dimensions to life, and we should be able to touch both. One is like a wave, and we call it the ultimate dimension, or nirvana. We usually touch just the wave, but when we discover how to touch the water, we receive the highest fruit that meditation can offer.

In the historical dimension, we have birth certificates and death certificates. The day your mother passes away, you suffer. If someone sits close to you and shows her concern, you feel some relief. You have her friendship, her support, her warm hand to hold. This is the world of waves. It is characterized by birth and death, ups and downs, being and non-being. A wave has a beginning and an end, but we cannot ascribe these characteristics to water. In the world of water, there is no birth and death, no being or nonbeing, no beginning or end. When we touch the water, we touch reality in its ultimate dimension and are liberated from all of these concepts.

We are always in relationship, with each other and with Original Source.  Seeing, understanding, and applying this truth can give rise to true happiness.  In our next installment of reports from World Buddhist Conference, we’ll hear ways we might manage relationships : with our self … with our family … and with the world.  [Stay tuned]