Los Angeles, USA -- American Buddhism’s numbers are booming. Published just over three years ago, an American Religious Identification Survey survey showed that from the years 1990 to 2000, Buddhism grew 170 percent in North America. By all indications that remarkable rate of growth continues unabated. 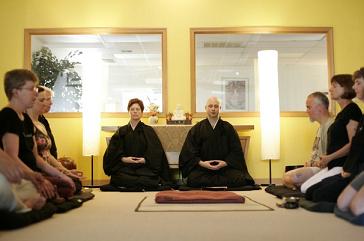 << In this Sunday, June 19, 2011 photo, Rev. Karen Do-on Weik and her husband Rev. Jay Rinsen Weik meditate at the Toledo Zen Center in Holland, Ohio. The two have created a Sunday school and other programs to be especially welcoming to families. Many U.S. Buddhists say that meditation centers aren’t especially welcoming of children, and some worry it will cost them the next generation of adherents. (JD Pooley - AP)

Why is a faith founded under a Bodhi tree in India 2,500 years ago enjoying a newfound popularity in America today?

There is no such thing as a historic North American Buddhist tradition, a fact that is crucial to understanding and facilitating Buddhism’s blossoming. This growth is all the more remarkable given that Buddhism was arguably the most recent import of a major religion to North America from the East. It’s important to note that Western practitioners meditating in Massachusetts or applying the Eight-fold Path in Portland often reach back to the established Buddhist traditions of Sri Lanka or Thailand, Tibet, or Vietnam, Myanmar or Korea, China, or Japan. But that’s not the only way to be Buddhist.

Some North American authors have suggested that North Americans might consider foregoing any such wholesale adoptions of Eastern traditions in deference to gradually developing their own. While not necessarily endorsing this view, even the Tibetan teacher Shamar Rinpoche posited that “Tibetans can benefit from being less sectarian, and certainly non-Tibetans [in context principally Europeans and North Americans] have no need for such distinctions.” The development of such a new North American sacred tradition is more possible with Buddhism than most other world religions owing to the relative simplicity and universal applicability of the dharma’s core principles and the Buddha’s teachings. That is partly because the dharma does not rely on faith in any deific being as conditions to one’s beliefs, as do other religions.

Still, some wonder: Does a practitioner born and raised in North America more easily adopt Buddhism if he takes it wholesale from the East?

One way to look at this question is through the example of practice. When done correctly, what Buddhist meditators refer to as “sitting”–whether following the vipassana or zazen (or other) approaches to sitting meditation–does not rely on ceremonial chanting and recitations and actions that typically surround collective meditation sessions. This is not to say such ceremonial activities normally performed in an ancient or modern Eastern language are not useful or helpful. This is only to say they are not a necessity for the gradual expansion of consciousness that is the result of regular meditation. If one accepts this basic premise, which can be supported by the sutras attributed to the Buddha, then the conclusion that North Americans could conceivably develop their own Buddhist tradition some day is perfectly rational, if not probable.

After all, none of the cultural accessories of Buddhist practices in the East came into being overnight; they themselves developed over time.

In Buddhism, that which does not differ from culture to culture or era to era is the state of a meditator’s mind and presence when that person is sitting in true mediation.

In association with other core teachings of the Buddha, such as compassion, non-violence, and loving-kindness all found within the Eight-fold Path, the attainment of the expanded states of consciousness almost always occurs only through regular and constant and diligent meditation practice, or sitting. This fact supersedes every associated ceremonial activity, whether Eastern in origin or some new (as yet unrealized) North American form. While such culture-based ceremony can be useful and helpful as a docent to meditation, if it becomes the practitioner’s focus, it becomes a distraction.

North American Buddhists are likely to create their own traditions and schools of thought, but they should do so with the awareness that they are forging a new Buddhist culture, not the ‘true’ Buddhist culture.

If they don’t recognize this fact, the same problem of adaptation would also apply, hypothetically, to any developed North American Buddhist tradition 900 years in the future either by its devout ecclesiastical adherents or when first introduced to the population of some other culture that had never

been exposed to the teachings of the Buddha.

-----------
William Wilson Quinn is a scholar of Buddhism and brother of On Faith’s Sally Quinn.