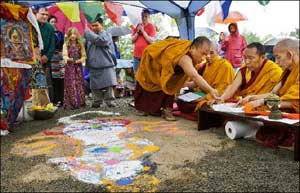 << SIMON WHEELER Ithaca Journal
At a ritual ground ceremony Wednesday for a new Buddhist monastery in the town of Ithaca, the Venerable Tenzin Wangchuk distributes earth from the site to other Tibetan monks. On the ground is the depiction of a Naga, a being that they believe protects the land.

About 50 people braved the rain Wednesday to witness the ceremony. The 15,000-square-foot monastery, scheduled to be built off Route 96B, will be able to support 25 to 30 students at a time. Construction is expected to begin this week and to be complete within two years.

"The Tibetan community has been excited about this project for some time," said Jeanine Rose Mollica, administrator for the monastery. "And as a Buddhist practitioner, it's of particular significance so we can begin building. The permit from the (town) of Ithaca is of legal significance; this ceremony is of spiritual significance."

The ceremony is a way for the monastery to ask spiritual permission to build on the property.

"Each place has its own god or goddess, so we pray for them to help us," said Ngawang Dhondup, assistant administrator of the monastery.

His Holiness the 14th Dali Lama of Tibet is scheduled to visit Ithaca on Oct. 9 and 10, when he will bless the new monastery. The current site of the Namgyal Monastery at 412 N. Aurora St. in Ithaca is currently the Dali Lama's seat of his personal monastery in North America.

The day selected for Wednesday's ceremony was no coincidence. An expert from the Tibetan Astrological Institute helped the monastery determine that Wednesday would be the most auspicious day to conduct the ceremony.

"Hence why we are standing here in the rain," Mollica said.

The monks spent about 30 minutes carefully preparing a plot of land so that colored sand could be used to depict a Naga, a being with both animal and human attributes that protects the land.

After laying down a foundation of white sand, the monks used bright orange, maroon, blue and green sand to depict the Naga.

Witnesses stood transfixed as the monks worked on their creation.

"I'm here because these are people of peace and these are people who are interested in the goodness of the entire world," said Jeanne Stone, who drove from outside of Rochester to witness the ceremony. "I think how one starts any project is very important and it's important for all kinds of people to show up here."

When the sand depiction was completed, the five monks began to chant prayers while one monk periodically chimed a bell.

Witnesses were handed pieces of earth and asked to throw the earth beyond the construction boundaries as part of the ceremony.

When the prayer was over, the sand depiction was mixed into the earth.

The monks were encouraged by the onlookers.

"We hope that this land will be very beneficial for our spiritual practices," said Tenzin Gephel, a monk with the monastery. "So that's why everybody came here. Maybe they are also saying the prayers, too."