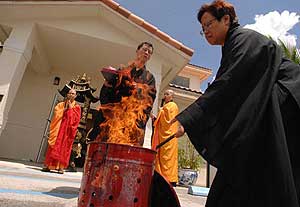 << Sign of respect
Fo Guang Shan Temple members in Tamarac burn papers on Sunday with names of people who are suffering. the burning marks the end of the Water Reprentance Ceremony. (Sun-Sentinel/Joe Cavaretta / August 27, 2007)

About 100 people knelt before a large ivory-and-gold Buddha statue at the Fo Guang Shan Temple for the annual Water Repentance Ceremony. The ritual dates back 1,500 years, when a spirit threatened a powerful monk, said Lung Chiu, a temple disciple. The monk learned to use water and chants to rid himself of the spirit, who showed up as a head on his knee. Lines from the chants tell Buddhists to confess wrongdoing and not to worry about material things, such as expensive clothing or money.

Water isn't used in the ceremony; instead, the focus is on repentance.

"That monk wrote everything down to try to help everybody, a script to repent all the things that are bad," said Johanna Tang of Coral Springs, a disciple and volunteer for the International Buddhist Progress Society, which runs the temple.

The host Buddhist monk, dressed in bright orange robes, led the nearly three-hour ritual in Mandarin Chinese. The disciples honored departed ancestors and family members, some of whom are ill. They also asked Buddha for forgiveness through chants, prayer and recitation of poems.

"Supposedly the temple is full of visitors, full of spirits," Chiu said during the ceremony. He visits regularly from his home in Loxahatchee and is president of the Buddhist Light International Association, a group that assists the International Buddhist Progress Society.

Buddhists also recite the water repentance during this time of year to remember the kindness of ancestors and wish them good fortune. "Since my father-in-law passed away, I come to the temple," said Alice Yu, of Deerfield Beach. Yu listened to the ceremony on an intercom in the kitchen while she helped prepare a vegetarian feast of fruits, tofu dishes and sesame seed desserts.

Pancy Luong also remembered her loved ones and those she may meet in the afterlife. She feels a connection with them because of Buddhist teachings about reincarnation.

"I'm thinking about everybody. They are, maybe, our parents, we don't know it," said the Delray Beach resident who helped with the ceremony and dressed in a black robe with a brown sash.

Red and yellow pieces of paper with gold Chinese characters were placed atop the altar by the large Buddha statue. Disciples donated money to dedicate the papers to a family member or entire family.

People also pray for the health of living family members.

All the papers were burned outside the temple at the close of the ceremony as a final sign of respect. People chanted as the ashes floated and disappeared into the sky. Chiu said words from the ceremony, although centuries old, still translate to modern times.

"Our sin accumulates as much as the ocean," he read from his prayer book, "if we don't confess and ask forgiveness."