BRADENTON, FL (USA) -- Wearing the brown robe of a Buddhist monk, the gentle man with a shaved head stood out when he ventured out into the community. 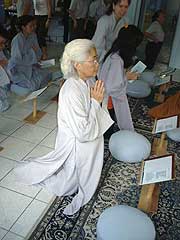 << Local Vietnamese Buddhists are able to practice their faith together in a new congregation located in Bradenton.

When other Vietnamese-Americans saw him, they would always ask about the possibility of opening a temple.

“Not yet,” was the Rev. Thich Phap Hue’s reply. The tiny minority community lacked the resources and wherewithal for such an ambitious undertaking.

It was his constant prayer that maybe someday, someway, local Vietnamese Buddhists could find a way to gather under one roof to worship in their native language.

Last year those prayers were answered. Through the efforts of several Vietnamese-Americans, they found and bought a rundown house in foreclosure, sitting on three acres south of Bradenton.

With lots of volunteer effort, by people who are all too familiar with life-and-death struggle, the Dieu Phap Tu congregation cleaned and spruced up the house and made it a center of religious and social life.

“One chopstick you can break easily,” Hue says of the power of teamwork. “Not so with many chopsticks together.”

Hue, and many of his congregation, survived the Vietnam War, fled the country after the communists toppled Saigon in 1975, and eventually made their way to the United States.

Among them, Sarasota residents Nga Phong and her husband Thoi Duong.

Thoi Duong, who had served in the South Vietnamese navy, was imprisoned for two years after the war. After he was released in 1977, he tried 23 times to escape Vietnam.

Finally, in 1983, the couple and two daughters fled Vietnam on a boat with 55 other people, including 22 children.

Thoi Duong steered the boat southwest across the Gulf of Thailand, not quite sure where they would make landfall.

“Seven days and seven nights at sea with no food, no water. I thought we would die,” Phong said.

The voyage ended on the southern tip of Thailand, near the border with Malaysia, where Phong revealed that she was pregnant with her third child.

After 18 months in a Thai refugee camp, the family was moved to Indonesia for six months to learn English.

Two years after fleeing Vietnam, they were allowed to immigrate to Sarasota, sponsored by Thoi Duong’s brother.

Her youngest daughter, who was born in Thailand, will graduate as a medical doctor May 15. Her other daughters are a pharmacist and business owner.

Buddhism, which has been called the religion of reason and meditation, is practiced by as many as 500 million people around the world.

It was founded in India about 2,500 years ago by Siddharta Gautama, who once said, “I teach only two things, zero disciples, the fact of suffering and the possibility of escape from suffering.”

The Buddha said that suffering and dissatisfaction come “to human beings because they are possessive, greedy and, above all, self-centered,” Nancy Wilson Ross explained in her book, “Three Ways of Asian Wisdom.”

Egocentrism, possessiveness and greed can, however, be understood, overcome and rooted out through an eight-fold path of behavior in thought, deed and word that the Buddha taught, according to Ross.

5. No use of intoxicants.

Hue says he encourages his congregation members to meditate and clear their minds of daily clutter and to live a life of love and compassion.

On a recent Sunday, Hue led the congregation through a series of chants designed to do just that.

“When you strive to think of nothing, it helps you remember everything,” Hue said.

The group of about 25 men and women followed the monk as he lead them through a series of chants, palms placed together prayerfully.

As they chanted, the worshippers continually move from sitting to kneeling to standing and then deeply bowing on the floor, before starting over again.

A nun, Thich Nu Dieu Thanh, provided a tap-tap rhythm on a kind of resonant drum.

After the service, members shared a vegetarian meal and socialized, most of the conversation in their native Vietnamese.

One of the congregation members, Hoa Pham, who works as a lab technician at a local hospital, said her faith helps her find peace, to forget herself and to help others.

Among those who found peace in the congregation is 15-year-old Minh Bao, a Sarasota High School student who said he once had an anger problem.

“I listen to the teachings of Buddha and I start to understand and calm myself down,” the polite, soft-spoken teen said.

“My parents don’t care if I am a Buddhist or a Christian. They just want me to be a good person,” Bao said.

Even though there is a sense of peace and happiness among congregation members, they have not been spared the tough economy.

Phong was laid off from her job as a machine worker in October and has been unable to find another job.

The Rev. Hue says that he counsels his congregation not to allow worry to consume them.

“A lot of people are in the same situation. I tell them not to worry, but to come out and pray to find peace,” he said.