Farmersville, TX (USA) -- If a driver takes a left just after passing over Lake Lavon, into a gate set a few steps off the highway, they’ll find a structure majestically out of place in Farmersville: the Kalachakra Buddhist Meditation Temple. 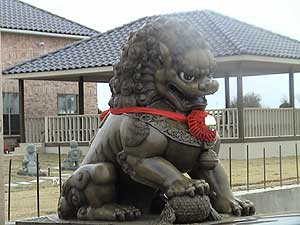 The architecture is striking from hundreds of feet, even before a wealth of statuary, both inside the buildings and around the grounds, becomes visible.

On a road otherwise populated by Christian churches of one denomination or another, the city makes room for a religion unfamiliar outside of words like karma and the image of a portly deity. Worshipers at the Meditation Temple follow the teachings of Lu Sheng-Yen, founder of the True Buddha School and the author of over 200 books.

A dedication ceremony held in November saw visitors from around the world—including such countries as Indonesia, England and Taiwan—gather at the temple, and people continue to make lengthy trips to spend time there. Vivian Lin, a follower of Lu’s from Houston, was on retreat there recently. The True Buddha School also has a temple in her hometown, but it is located in a noisy, heavily populated area. Farmersville was chosen as the site for the second of the school’s Texas temples because of its rural landscape and proximity to Dallas.

“Dallas is a big city, and we don’t have any membership around here,” said Abbot Master Lian Zhun.

“I think the master wanted to build a meditation center where it wouldn’t be inside a city, so people can come here to retreat to meditate and cultivate themselves,” Lin said. “At Houston, out temple is in the middle of Chinatown.”

Lin said that neighbors have taken an interest in the temple, starting with curiosity over what was being built on the land and switching to amazement once they see the finished project. The grounds contain several buildings, including three temples (a large central one flanked by two smaller buildings), dormitories and a library.

Lin summarized some True Buddha School teachings, including a belief in reincarnation and focus on self-realization, saying that if you want to know what you did in past lives, look at what you are right now; and that if want to know what you will be, look at what you’re doing. On Sundays, between 20-30 followers gather for mediation and group practice lasting from 10 a.m. to noon before lunching together and taking part in a fire offering at 3 p.m. Visitors are welcome.