Fort Wayne, IN (USA) -- Fort Wayne has always embraced immigrants – from Germans more than a century ago to the influx of Burmese in the past 10 years. 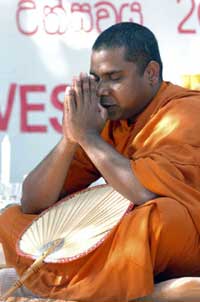 The Mons, a minority group in Myanmar, formerly known as Burma, chose Fort Wayne for the high-paying factory jobs and low cost of living.

Large numbers of Burmese started coming after the 1998 pro-democracy uprisings in their homeland. There are now between 2,000 and 3,000 Burmese and more than 500 Mons in Fort Wayne.

The Burmese also brought their Buddhist philosophy to the community.

Within the past 12 years, six Buddhist temples have entered Fort Wayne’s network of worship.

All practice the same type of Theravada Buddhism but vary in language and culture.

Language is the major difference between the temples. Nai Yekha, co-secretary at the Mon Buddhist Temple, said Mons don’t know how to pray or chant in Burmese.

“The religious purpose is not really different, the only thing is the language,” Nai Yekha said. 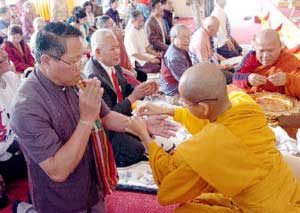 Boun Hueng, left, is blessed by a monk at the Wat Lao Samakky, 6409 Decatur Road, New Year’s celebration. Theravada Buddhists’ new year is celebrated for three days from the day of the first full moon in April.  >>

According to Sisakhone Mounsamruath, a member of Wat Lao Samakky who has attended both the Mon and Sri Lankan temples, a woman can give something directly to a Sri Lankan or Mon monk. At a Laotian temple, she can’t. The men sit up front, and the women in the back during religious gatherings, she said.

No matter the country and language of origin, all monks know Pali, the ancient language of Lord Buddha.

“When we have a special ceremony, we need five monks,” said Kham Kenchanh of Wat Lao Samakky. “We have to invite from other temples.”

Buddhism is a religion and a philosophy, according to Abbot Thalangama Devananda of the Indiana Buddhist Institute.

“Buddism is not bound by a hierarchical god structure,” said Dr. Sisira Ranasinghe of Indiana Buddhist Institute. “This is a way of life and basically a philosophy to find yourself and to survive your lifetime on Earth.”

Most of the local temples started with a rented home and an invitation to a monk, who speaks their language, to live there. Members of the temple share the rent and expenses. As is the tradition in their homeland, the women take turns preparing meals for the monks.

The living room is converted into a Dhamma Hall for worship and Buddhist celebrations. If the monk decides to stay, and a sufficient membership develops to support the temple, a search for property begins.

In 1997, the Fort Wayne Laotian community decided it was important to establish its own temple, Wat Lao Samakky, after about 20 years of going back and forth to a Laotian temple in Rockford, Ill.

According to Sisakhone Mousamruath, her neighbor, Pieng Thongkhot, who had been a monk, called all the Laotians in Fort Wayne – about 100 families – and asked whether they could donate about $10 a month to rent a home for a monk.

In April 2005, Society of Theravada Buddha Dhammarekkhita Monastery moved to a 7-acre property on Hartzell Road. But the group is running out of space. At an elders’ ceremony last spring, the 200 members spilled out of the converted living room and into the kitchen, hallways, family room and garage, where members watched the ceremony on TVs.

Plans are under way to construct a new, larger area for ceremonies.

With hopes of a similar expansion, the Mon Buddhist Temple at 5824 Decatur Road paid off its mortgage over the summer and is eyeing the vacant land next door for parking to accommodate a growing membership. The group started with about 100 members in 1999 but is now at 500 members, according to Michael Mon, co-secretary of the Mon Buddhist Temple.

After looking at more than 100 properties, a tri-level home on Webster Street was selected. The home looks like the rest of the homes on this quiet street. Most people would drive by without noticing if it weren’t for the Buddhist flags out front. A closer look would also uncover a shoe stand at the front door. As with all temples, people are required to remove their shoes before entering.

Most of the Indiana Buddhist Institute members are from out of town, with members coming from Illinois, Michigan and Indiana. The members meet for a few yearly ceremonies. A Monday evening meditation group meets every week.

After a job transfer, Ellie Hernawati, who was raised Buddhist in Indonesia, did not expect to find much of a Buddhist community in Fort Wayne.

“I was surprised when I found this religion and cultural diversity in Fort Wayne. I am really happy by it,” said Hernawati, a member of the Indiana Buddhist Institute. “It surprised me even more how many people and how many different kinds of culture mix together in this kind of place. Some of them are not even Buddhist. They are welcome.

They join. We gather together. They’re happy.”

1998 – Larger numbers of Burmese begin moving to Fort Wayne after a pro-democracy uprising in Myanmar, formerly known as Burma, is put down by the ruling military junta