Although critics get hung up on labels, Buddhist Christians meditate on the benefits they discover

St. Paul, Minn. (USA) -- Mary Jo Meadow avoids using what she calls the "B word." It's not the "B word" you might expect, but the retired religious studies professor says that many people consider it just as profane, in its own way. 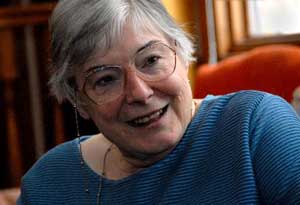 The word is Buddhist. Meadow is considered one the world's foremost experts on Buddhist Christians, although some people try a slightly different spin by calling themselves Christian Buddhists.

"It doesn't really matter which word comes first," Meadow said. "Once people hear the 'B word,' that's all they react to. As a result, a lot of people [who practice it] keep it secret, including a man who told me, 'If my fundamentalist father-in-law found about this, I'd be dead.' "

Buddhist Christians apply Buddhist techniques -- especially meditation -- to their spiritual exploration of Christianity. Because so many people do this on the QT, no one is sure exactly how many practitioners there are, but Meadow said "it's clearly in the thousands worldwide, with more than 100 in Minnesota."

Last year, she published her second book on the subject (and her seventh overall), "Christian Insight Meditation." She proudly notes that one Roman Catholic priest wrote the introduction and another provided an endorsement for the back cover.

"There are some very highly placed Christian people who do this practice," she said. "But they keep it secret because it's seen as betraying Jesus in the minds of some people. A lot of Christian people can't get by that idea."

Marianne Hamilton, a cofounder of Women Against Military Madness (WAMM) and a "hardened Catholic," went on her first Buddhist Christian retreat "so long ago that I can't even remember when it was." She still meditates for an hour a day and has started a weekly group session in her high-rise.

"It's a wonderful way of quieting yourself," she said.

Meadow has launched a nonprofit organization, Resources for Ecumenical Spirituality, that holds workshops and retreats. In addition to teaching in Europe and Australia, she teaches community education programs through the Forest Lake school system.

Not that the classes have always been enthusiastically received. When she first offered a community ed program, "a bunch of angry men stormed the community ed office and demanded that I stop," she said.

She hardly seems the type to engender such strong ire. Having retired from Minnesota State University-Mankato in 1998, she moved to Missouri briefly before relocating to the Twin Cities to be near her children ("six homemade, two imported") and grandchildren. Meadow, 72, still bubbles with enthusiasm for teaching, interrupting herself to jump up and find a book that reinforces what she's saying.

Nor does she condemn those who condemn her program. Part of the reason is that she's stood in their shoes.

In the late 1980s, "there was a Hindu yogi who was offering a night class, and my students asked me what I thought about that," she said. "I hadn't heard him speak. I was thinking, 'I'm a Christian, what can a pagan teach me?' But the students shamed me into going to hear him. Here I was, teaching a course in religion, and I didn't know anything about this.

"So I went to hear him speak. And when he got done, I said to myself, 'There are a lot of things this man could teach me.'"

What Meadow will explain to her critics -- at least the ones who do her the courtesy of letting her respond -- is that there's a distinction between Buddhism as religion and Buddhism as a meditation technique. One is a belief system; she doesn't teach that. The other, the one she focuses on, is a process.

"Christianity includes a call to meditate, but it never provides a method of meditating, a step-by-step guide on how to do it," she said. "As a result, a lot of Christian meditation gets stale because you get stuck. The yogi saw the problem right away and helped me fix it."

For her, the turning point came when she finagled her way into an intensive meditation workshop in 1989.

"It was a three-month retreat in which there was no reading, writing or talking, except for 10 minutes a week when you met with your teacher," she said. "You weren't supposed to go unless you'd gone to some of their other retreats before, but I knew that if I checked the 'new student' box, they wouldn't let me in. So I left it blank, and they never caught it."

And then there are a few people such as Judy Luger, who didn't sign up for the class at all but now is glad that she took it.

"Unbeknownst to me, my daughter signed me up for one community ed class in meditation and another one in pottery," she said. "That was the fall of 2005, and I'm still meditating." (By the way, she's still doing pottery, too. "There's actually a strong meditative element to pottery," she said.)

Wendy Dahlberg enrolled in one of Meadow's classes four years ago, hoping to find a way to deal with chronic pain. She's gotten so adept at it that Meadow is grooming her to be a teacher.

"I took the class for one reason, but discovered a lot of other reasons to keep taking it," she said. "I found in meditation practice a way to cope with a lot of things. It has taught me not to respond so much to what is going on around me."

Meadow said that's one of the telltale signs that a person is practicing meditation. They might keep the meditating secret, but they can't hide its effect.

"They won't tell anyone they're doing it, but a friend will notice and say, 'Gee, you're a lot easier to get along with lately,'" she said.